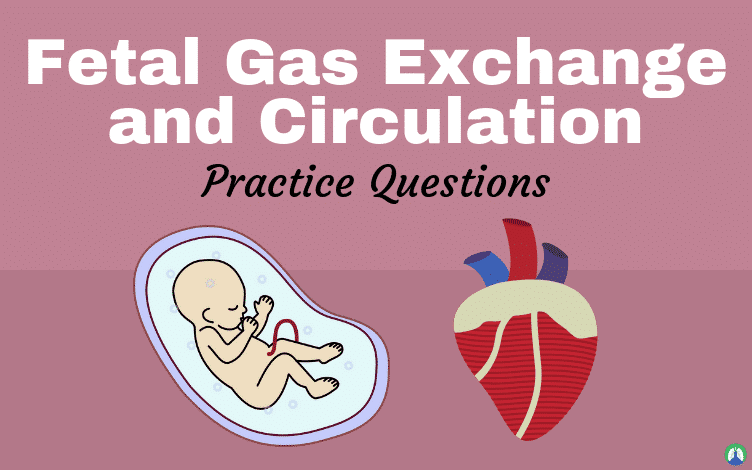 Are you ready to get you learning on about Fetal Gas Exchange and Circulation? I sure hope so because that is what this study guide is all about. This is yet another topic that you will need to know for you Neonatal and Pediatric course in Respiratory Therapy school. The good thing is, these practice questions can help you learn everything that is required. So are you ready to get started?

1. During what week of gestation is the heart fully formed?
The third week.

2. What week of gestation is the heart fully functional, complete with chambers, valves, and major vessels?
The eighth week.

3. What is the term used to describe the “blood islands” that supply nutrition to the growing embryo?
Angiogenic clusters.

5. What are the 3 identifiable structures of the heart tubes during the 4th week of gestation?
Bulbus cordis, ventricular bulge, and atrial bulge.

6. What are the 3 fetal shunts?
Ductus , Foramen Ovale, and Ductus Arteriousus.

7. What shunt redirects blood away from the liver?
Ductus .

8. What shunt is located between the right and left atrium?
Foramen ovale.

9. What shunt allows blood in the pulmonary artery to bypass the lungs and heart?
Ductus .

10. Closure of the foramen ovale causes increased pressure where?
The left atrium.

13. What structure does the ductus arteriousus transform into after closure?
Ligamentum arteriosus.

14. 20% of the ductus arteriosus closes within how many hours of birth?
24 hours.

15. What two shunts normally present in the fetus can result in persistent cyanosis in the newborn?
Ductus and foramen ovale.

16. Why would a newborn with persistent cyanosis be at risk for refractory hypoxemia?
The foramen ovale and ductus arteriosus are anatomic shunts that allow blood to flow from the right side of the heart to the left side and systemic circulation without passing through the parenchyma of the lung.

17. Why are the two oximetry readings necessary, and why are the probes placed on the right hand and left foot?
The foramen ovale feeds blood to the head, right arm, and coronary circulation. If this shunt does not close and is not being O2 fed by the umbilical cord it will show by the right-hand oximetry. The left foot would receive blood only if the ductus arteriosus closes begins to close after birth.

18. What is the embryonic germ layer which gives formation to the respiratory system?
Endoderm.

19. What is the gelatinous substance inside the umbilical cord which helps protect the vessel and prevents the cord from kinking?
Wharton’s jelly.

22. What are the three anatomic structures that constitute fetal shunts?
(1) FORAMEN OVALE, which is the opening between the right atrium and the left atrium, which enables oxygenated blood to flow to the left side of the fetal heart; (2) DUCTUS VENOSUS, which appears continuous with the umbilical vein and shunts 30% to 50% of oxygen-rich blood around the liver to the inferior vena cava; and (3) DUCTUS ARTERIOSUS, which allows most of the pulmonary arterial blood flow to bypass the nonfunctioning fetal lungs and enter the aorta.

23. What causes cessation of to left shunt throughout the foramen ovale after the umbilical cord is clamped?
It removes the low-pressure system. Right-sided heart pressure decreases and left-sided pressure increases.

24. How long after birth should it take for the ductus arteriosus to close completely?
96 hours.

25. How does oxygenated blood leave the placenta and travel to the fetus?
Umbilical vein.

26. How most of the fetal blood entering the main pulmonary artery shunted to the aorta?
Ductus Arteriosus.

27. How most of the fetal blood entering the umbilical shunted to the inferior vena cava?
Ductus Venosus.

28. What defines the developmental phase of the fetal lung?
Characteristic anatomical growth and maturation

29. What is the importance of a thorough understanding of each stage of fetal lung development?
It helps identify problems occurring and help to prepare for the delivery and care.

30. Fetal survival outside the uterus becomes possible at approximately how many weeks gestation?
24.

31. What can occur at any point during gestation?
Abnormal lung development.

32. How many weeks gestation does the alveolar type II cells produce surfactant?
22.

34. What are the phases of human lung development?
Embryonal, canalicular, and saccular.

35. Where does the initial lung bud emerge?
The pharynx.

36. Which gestational phase of lung development is the bronchial tree formed?
Pseudoglandular.

38. What are the minimal developmental features required for an immature human fetus to survive outside the uterus?
Enough alveolar and vascular surface area for gas exchange, 22 – 24 weeks of gestation, and near completion of the canalicular stage of lung development.

39. What best describes fetal lung liquid?
It maintains the structure of the airway lumen and developing alveoli preventing complete collapse and with fetal breathing movement. It continuously flows out of the lungs and is swallowed or excreted into the amniotic fluid.

40. Estimates of the exact number of alveoli at birth vary widely, but investigators agree that?
Gas exchange surface area grows proportionally with an increase in O2 consumption and body surface area.

41. What lung development stage formerly thought to be the last stage before birth, and characterized by relatively smooth walled cylindrical structures subdivided by ridges known as secondary crests?
Alveolar phase.

42. Pulmonary hypoplasia is a relatively common abnormality of lung development with a number of clinical associations, including what
Lung tissue compression, oligohydramnios, and maternal diabetes.

44. What is the first complete organ to form?
The heart.

45. What is the importance of identifying the stages and development of the heart?
It helps in understanding congenital problems that can occur when development doesn’t proceed as expected.

47. Why are the DA, FO, and DA shunts essential?
Proper nutrients and gas exchange in the fetus and appropriate distribution of blood through fetus along with the pressure gradients induced by circulatory systems.

48. What are some of the fetus’ circulatory systems?
Placental, pulmonary and systemic.

49. What statement concerning the development of the circulatory system?
Heart development, other than growth is complete when valve formation is complete. Angiogenic clusters supply nutrition in the earliest stages of the growing embryo, and at about 3 weeks, two heart tubes fuse into what will become the basic structure of the four chamber heart.

50. What structures are recognizable during the development of the heart after the heart tubes fuse?
Bulbus cordis, atrial bulge, and ventricular bulge.

51. How does oxygenated blood leave the placenta and travel to the fetus?
Through the umbilical vein.

52. Most of the fetal blood entering via the umbilical vein is shunted to the inferior vena cava through the?
Through ductus arteriosus.

53. Most of the fetal blood entering the umbilical vein is shunted to the inferior vena cava via what?
Through the ductus .

55. Most of the fetal blood entering the right atrium is shunted to the left atrium via what?
Foramen ovale.

56. What is true when discussing fetal circulation?
Fetal shunts help to shunt the best oxygenated blood to the head, pressure gradients related to blood flow are the opposite of those in an adult, fetal shunts help to bypass the lungs, and the placenta has low vascular resistance.

57. What one set of actions causes the systemic circulation to transition from a low-resistance system to a high-resistance system?
Clamping the umbilical cord thus preventing blood flow to the placenta.

58. Anatomical narrowing of the ductus arteriosus begins in the last trimester by what process?
The formation of bulges known as intimal mounds.

59. What enters the uterus around the 4th or 5th day and is also known as the fertilized egg?
The Zygote.

60. What are the three major fetal growth periods?
Ovum, embryo, and fetus.

61. What will become the fetus?
The blastoderm.

62. What will become the placenta?
The trophoblast.

64. What is the name of the three germ layers?
Ectoderm, mesoderm, and endoderm.

65. Which germ layer is known for the creation of the central nervous system?
The ectoderm.

66. Which germ layer is known for the creation of the cardiovascular system?
The mesoderm.

67. Which germ layer is known for the creation of the respiratory system?
The endoderm.

68. What are the fetal vessels called that are found within intervillous spaces?
Chorionic Villi.

69. How does oxygenated blood travel from the placenta to the fetus?
The umbilical vein.

70. What is the gelatinous substance inside of the umbilical cord which helps protect the vessels and keeps the cord from kinking?
Wharton’s jelly.

71. During which week of gestation is the heart fully formed?
The third week.

72. When is heart development fully complete?
When the heart valves have been complete.

73. What forms the primitive vascular network during the early stages of the embryo?
Angiogenic clusters.

75. During what week of fetal development is the heart rate approximately 95 beats per minute?
16 weeks.

76. During what week of fetal growth is the truncus arteriosus divided into two vessels?
Week 6.

77. What two vessels are formed when the truncus arteriosus splits?
The pulmonary artery and the aorta.

78. What four structures are recognizable during the development of the heart after the heart tubes have fused?
Truncus , bulbus cordis, ventricular bulge, and sinus .

79. What is the pressure difference between adult circulation and fetal circulation?
It is reversed, the right side is high in pressure and the left side is low.

80. What areas of the fetal heart causes the low vasculature of the placenta?
The aorta, left ventricle, left atrium, and entire arterial system.

81. What is the opening between the right and left atrium which enables oxygenated blood to flow to the left side of the fetal heart?
The foreman ovale.

82. What is continuous with the umbilical vein and shunts 30-50% of oxygen-rich blood around the liver to the inferior vena cava?
The ductus venosus.

83. What allows most of the pulmonary arterial blood flow to bypass the nonfunctioning lungs and enter the aorta?
The ductus arteriosus.

84. Why most of the blood enter the aorta through the ductus arteriosus?
High resistance in the pulmonary vasculature.

85. How is the ductus arteriosus kept open?
Low PaO2 of the aorta.

86. Anatomic narrowing of the ductus arteriosus begins in the last trimester by the formation of bulges known as what?
Intimal mounds.

87. After birth what is done that takes away the low-pressure system of the placenta ultimately closing the foramen ovale?
Clamping of the umbilical cord.

88. A new increase in what closes the foramen ovale which further increases blood flow to the lungs?
Increase in systemic vascular resistance.

So there you have it. That wraps up our study guide on Fetal Gas Exchange and Circulation. I hope that these practice questions were helpful for you and if you use them properly, you can learn everything you need to know. Thanks for reading and as always, breathe easy my friend.