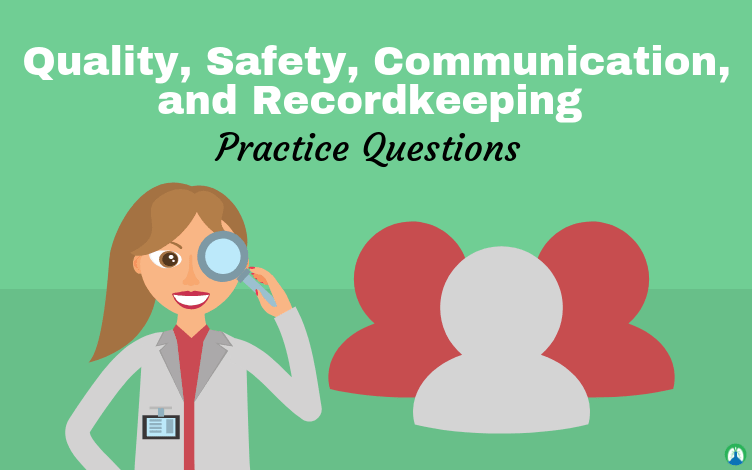 Are you looking for a study guide on Quality, Patient Safety, Communication, and Recordkeeping in Respiratory Care? If so, you’re in the right place. The practice questions found here cover everything you need to know from Egan’s Chapter 3 in order to prepare for your exam in Respiratory Therapy School.

So if you’re ready to get started, let’s go ahead and dive in.

1. What is the value of a service or product that refers to the sum of its properties that serve to satisfy the needs of its consumer?
Quality

2. What is the normal distribution bell/distance deviation curve?
+/- 2

3. What are the key areas of potential risk for patients and co-workers?
Patient movement and ambulation, Electrical & fire hazards, and General safety concerns.

5. What is the correct technique for lifting an object?
Straight spine & bend legs

7. How do you monitor the patient during patient ambulation?
LOC, color, breathing, strength or weakness, complains (SOB/pain).

8. How do you move a patient up in bed with the patient’s assistance?
Have the patient dig in with their heels; then lift and pull.

9. What represents the greatest danger to you or your patients when an electrical shock occurs?
Current.

10. What does the harmful effects of a current depend on?
The amount of current, the path it takes, and the duration the current is applied.

11. How may current flow into the body and cause damage to vital organs?
It can bypass conductors such as pacemakers or saline filled IV catheters.

12. What should all electrical equipment be connected to?
Grounded outlets with 3 wire cords.

13. What does the third (ground) wire prevent?
A dangerous buildup of voltage that can occur on the metal frames of some electrical equipment.

14. Hospital fires can be very serious, especially when?
When they occur in patient care areas and when supplemental oxygen is in use.

15. What conditions will some material burn in when they wouldn’t burn at room air?
Oxygen-enriched air.

17. Is oxygen flammable?
No, but it greatly accelerates the rate of combustion.

18. How does burning speed increase?
With an increase in concentration or partial pressure of oxygen.

19. What does RACE stand for?
Rescue – Alert – Contain the fire – Evacuate.

20. What is a key component of disaster preparedness?
It involves learning to transport and transfer critically ill patients safely.

21. What are the physical hazards resulting from improper storage or handling of cylinders?
Increased risk for fire, explosive release of high-pressure cylinders and the toxic effect of some gases.

22. What is the way to store and transport cylinders?
Appropriate racks or chained containers.

23. How should you never store compressed gas cylinders?
Without support.

26. What are examples of a two-patient identifier system?
Name and Birthdate.

28. What are examples of effective feedback mechanisms in oral communication with patient care?
Attending, Paraphrasing, Requesting clarification, and Perception checking.

29. What involves the use of gestures and posture that communicates one’s attentiveness?
Attending

30. What is a technique that is useful in confirming that understanding is occurring between the parties involved in the interaction?
Paraphrasing

31. What begins with an admission of misunderstanding on the part of the listener, with the intent being to understand the message better?
Requesting clarification.

32. What involves confirming or disapproving the more subtle components of a communication integration, such as messages that are implied?
Perception checking.

33. What is HIPPA and when was it enacted?
Health Insurance Portability and Accountability Act of 1996.

35. What would you find in the Admission Data?
Nearest of kin, admitting physician and admission diagnosis.

36. What would you find in the Physician Orders?
Records the physician’s orders and prescriptions.

37. What keeps a continuing account of the patient’s progress for the physician?
Progress Notes.

38. What would you find in Medical Records?
Notes, along with the drugs and IV fluids that are given to the patient.

39. What is the number one thing you should never ever do on a medical record?
Erase anything that is on it.

40. What does SOAP stand for?
Subjective – Objective – Assessment – Plan of Action

41. Disaster preparedness includes what?
The transport and transfer of a critically ill patient, and the preparation for the loss of electricity.

42. Documentation flow sheets are designed to:
Briefly report data, and Decrease the time spent on documentation.

43. Electricity moves from point A to point B due to differences in what?
Voltages.

44. Extended bed rest can result in which of the following?
Atelectasis

46. Fires in areas where oxygen is being used extremely dangerous because?
Oxygen speeds up the rate of combustion and makes everything catch on fire with more quickly.

47. Flammable material should be removed from the vicinity of oxygen when?
Any time oxygen is in use.

48. What are the general rules for recordkeeping?
Entries should be printed or handwritten, Do not use ditto marks, Do not erase, Record each patient interaction and sign the entry, Document patient complaints, Do not leave blank lines, Use standard abbreviations only, Use present tense, Use proper spelling, Document all important conversations, and Be as accurate as possible.

49. High currents passing through the chest can cause?
Ventricular Fibrillation, Diaphragm Dysfunction, and Death.

50. What are some general rules for magnetic resonance imaging (MRI) safety?
No metal components or objects allowed in the MRI suite, you should use MRI compatible ventilators, oxygen supplies, and ancillary equipment.

51. Medical records can only be seen by who?
The patient or persons directly related to the improvement of the health of the patient.

52. What is the most import aspect of safe patient care?
Effective communication.

53. Most shock hazards are caused by what?
Inadequate grounding.

54. What does OEA stand for?
Oxygen Enriched Atmosphere.

55. Oxygen is not flammable, but it can do what?
It can greatly accelerate the rate of combustion.

53. What is the primary source of conflict?
Poor communication.

54. Being successful as a Respiratory Therapist depends on what?
Your ability to communicate well with patients and other members of the healthcare team.

56. What is the role of the Respiratory Therapist when it comes to the patient’s direct environment?
Our role is to position the equipment, tubing, and treatments out of the way as much as possible.

57. All health care personnel must use the “two patient identifiers” before initiating care, which include all of the following, except?
Room number.

58. All of the following techniques can be used to improve one’s effectiveness as a sender of messages except:
Emphasize agreement over disagreement.

61. How can the risk of fire because of static electrical discharge in the presence of oxygen be minimized?
Maintain high relative humidity in the area of use.

62. If you make a mistake when charting a patient treatment, what should you do?
Draw a line through the mistake and write “error” above it.

63. Improper storage or handling of medical gas cylinders can result in which of the following?
Increased risk of fire, explosive releases of high-pressure gas, and toxic effects of some gases.

64. In the standard approach to hospital fires, the RACE plan has been suggested. What does the letter “C” stand for in this approach?
Contain

65. Information about a patient’s nearest kin, physician, and initial diagnosis can be found in which section of the medical record?
The admission sheet.

66. Key barriers to effective interpersonal communication include all of the following except:
Similar perceptions of the problem.

67. Lifting heavy objects is best done with which of the following techniques?
Straight spine and bent legs.

68. Maintaining eye contact, leaning toward the patient, and nodding your head are all good examples of what communication technique?
Attending

69. Medical records are strictly confidential and are protected under what law?
HIPPA

70. A patient who is on a ventilator is going to be transported to MRI. Which of the following is the most important piece of equipment to have available in the MRI suite?
An MRI compatible ventilator.

71. A patient’s response to an interview question is initially unclear. Which of the following responses on your part would be most appropriate?
Please explain that to me again.

73. A Respiratory Therapist is instructing a patient on a particular piece of equipment, and should use which scenario on educating the patient?
The teach-back technique.

74. The techniques to help ensure that understanding is taking place between the parties involved in an interaction include which of the following?
Clarifying, paraphrasing, perception checking, and attending.

75. A respiratory therapist who says “Please explain that to me again” to a patient during an interview is using what interpersonal communication technique?
Clarifying

76. A respiratory therapist who says “You seem to be anxious about your surgery” to a patient just admitted for bypass surgery is using what interpersonal communication technique?
Reflecting feelings.

77. To check on the results of a patient’s recent blood work, you would go to which section of the medical record?
Laboratory sheet.

78. To confirm a physician’s prescription for a drug that you need to give to a patient, you would go to which section of the medical record?
Physician’s order.

79. To determine any recent trends in a patient’s pulse, respiration, or blood pressure, you would go to which section of the medical record?
Vital sign sheet.

80. To determine the amount of urine excreted by a patient in the last 24 hours, you would go to which section of the medical record?
Intake and output (I & O) sheet

81. To determine the most recent medical status of a patient whom you are about to start treating, you would go to which section of the medical record?
Progress sheet.

82. To find out what drugs or intravenous fluids a patient has received recently, you would go to which section of the medical record?
Medication record.

83. What form of patient record is most designed to succinctly report data in a time-oriented format and to decrease the time needed for documentation?
Flowsheet

84. Where do most hospital fires initially start?
In the kitchen. If you can’t take the heat, stay out of the kitchen.

85. Which group or organization regulates the storage of medical gases?
The Joint Commission (TJC).

86. Which of the following are unacceptable practices in medical recordkeeping?
Providing your own interpretation of a patient’s symptoms, and charting several separate tasks under a single chart entry.

87. Which of the following factors are most critical in determining when a patient can be ambulated?
The stability of their vital signs, and the absence of severe pain.

89. Which of the following is a method for communicating empathy to your patients?
The use of touch, the use of keywords, and the use of eye contact.

90. Which of the following is an acceptable practice in medical recordkeeping?
Using standard abbreviation.

91. Which of the following is true about fires in oxygen-enriched atmospheres?
They are more difficult to put out, they burn more quickly, and they burn more intensely.

92. Which of the following is used to report electrical current?
Amps

93. What are the potential areas of risk to patients receiving respiratory care?
Movement or ambulation, electrical shock, and fire hazards.

94. Which of the following organs is the most sensitive to the effects of electrical shock?
The heart.

95. Which of the following statements is false about patient ambulation?
Patients with IV lines should NOT be ambulated.

96. Which of the following strategies for conflict resolution represents a middle-ground strategy that combines assertiveness and cooperation?
Compromising

97. Which of the following terms describes the power potential behind electrical energy?
Voltage

And that wraps up our study guide on Quality, Patient Safety, Communication, and Recordkeeping. I hope you found this information to be helpful.

I’m confident that these practice questions can teach you everything you need to know from Egan’s Chapter 3. But as I always say, it never hurts to go back and re-read the entire chapter if you truly want to learn the information.

How to Prepare for the TMC Exam