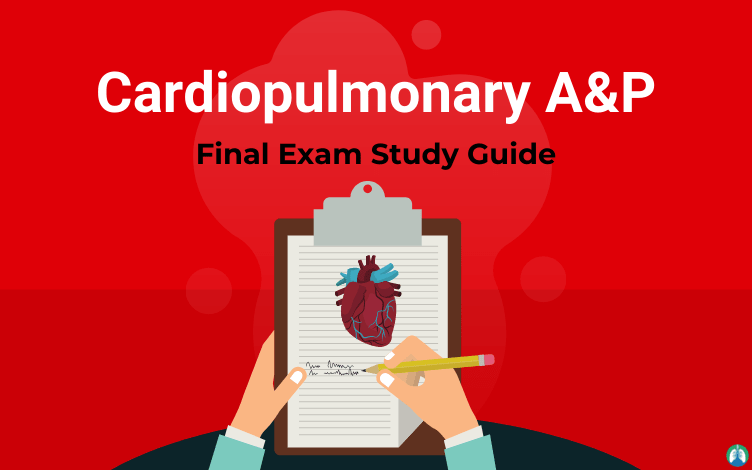 As I’m sure you’re already aware, Cardio A&P is one of the most important subjects that you will learn about in Respiratory Therapy School! Not to mention, it’s a course that many students struggle with.

Knowing the ins and outs of this subject is crucial for anyone who wants to become a successful Respiratory Therapist. And the goal of this study guide is to help you do just that.

Below, you will get access to some of the best practice questions that will help you learn everything you need to know about Cardio A&P. And hopefully, after reading through this information, you will be able to ace your final exam.

So if you’re ready, let’s go ahead and dive right in!

🔒 Below you can find all of the practice questions that can help you prepare for your Cardio A&P Final Exam. If you need the correct answers as well, you can get them (free) by Clicking Here.

1. As the respiratory therapist, you have given supplemental oxygen to a patient with pneumonia. What would cause the patient to be hypoxemic?
1. Diffusion defect
2. Capillary shunting
3. Alveolar consolidation
4. Hypoventilation

2. When auscultating over an area of pneumonia, what breath sound can be expected?
A.
B. wheezing
C. bronchial
D. vesicular

3. A patient has been admitted to the emergency department with the following arterial blood gas results:
pH 7.50
PaCO2 30 torr
PaO2 85 torr
HCO3- 24 mEq/L

5. The respiratory therapist is evaluating the record of an adult patient. A note in the record indicates that the chest radiograph shows the level of the diaphragm just below the 10th rib. This finding is consistent with:
A. amyotrophic lateral sclerosis.
B. a normal finding.
C. hyperinflation.
D.

6. The respiratory therapist is reviewing the record of a patient for whom an arterial blood gas test has been ordered. In order to properly prepare for the arterial puncture, which of the following lab values is most critical to review?
A. bilirubin
B. serum sodium
C. prothrombin time
D. alkaline phosphatase

8. A patient’s complete blood count (CBC) shows that the white blood count (WBC) is twice the high end of the normal range. This indicates:
A. leukopenia.
B. leukemia.
C. leukocytosis.
D. viral infection.

9. An elderly patient with a history of very significant emphysema presents to the emergency department (ED) with shortness of breath. The ED physician asks the respiratory therapist which value in the patient’s ABG analysis would be most reflective of the severity of the patient’s pulmonary disease. The therapist’s response should be:
A. PaCO2.
B. pH.
C. HCO3-.
D. PaO2.

12. Which of the following types of tissues is responsible for pumping blood throughout the body?
A. skeletal muscle
B. smooth muscle
C. cardiac muscle
D. intercalated cells

13. Which of the following is NOT one of the main tissue types found in the human body?
A. epithelial
B. connective
C. myocardial
D. muscle

14. Which of the following is not one of the three main factors influencing blood pressure?
A. cardiac output
B. peripheral resistance
C. emotional state
D. blood volume

15. Which statement best describes arteries?
A. All carry oxygenated blood to the heart.
B. All carry blood away from the heart.
C. All contain valves to prevent the backflow of blood.
D. Only large arteries are lined with endothelium.

16. Permitting the exchange of nutrients and gases between the blood and tissue cells is the primary function of _______.
A. arterioles
B. arteries
C. veins
D. capillaries

18. Blood flow to the skin ________.
A. is controlled mainly by decreasing pH
B. increases when environmental temperature rises
C. increases when body temperature drops so that the skin does not freeze
D. is not an important source of nutrients and oxygen for skin cells

19. Which of the choices below does not involve tissue perfusion?
A. delivery of oxygen and nutrients to, and removal of wastes from, tissue cells
B. gas exchange in the lungs
C. absorption of nutrients from the digestive tract
D. blood clotting

20. The arteries that directly feed into the capillary beds are called ________.
A. muscular arteries
B. elastic arteries
C. arterioles
D. venules 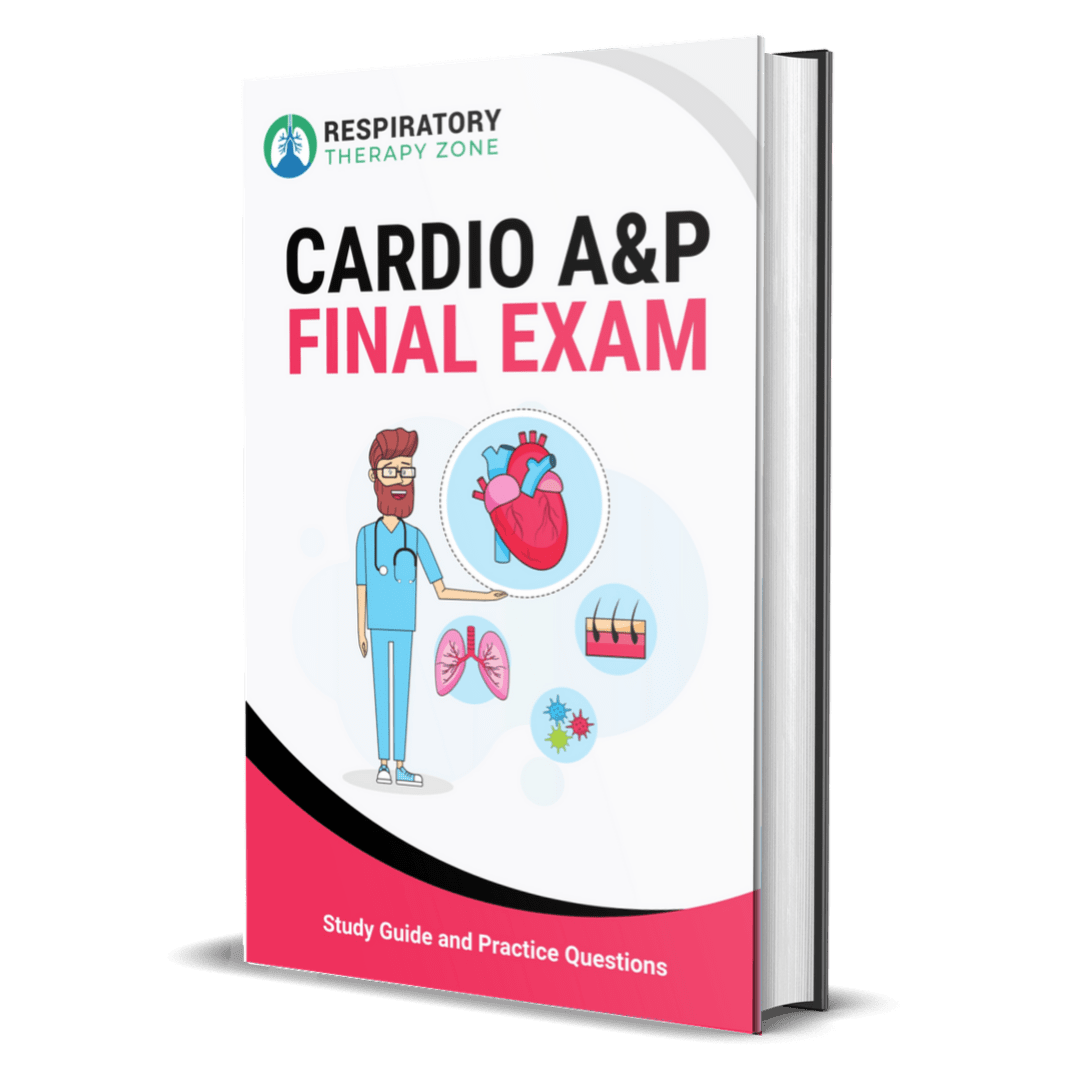 Do you need the answers to this study guide? Just click the button below for an instant download. No worries, they’re free.

We’ll also send you other updates from time to time.

25. After inhaled air goes through the larynx, the NEXT part of the respiratory system the air passes through as it moves to the lungs is the:
A. bronchus
B. larynx
C. epiglottis
D. trachea

26. The chamber that pumps oxygen-rich blood out of the heart for distribution to the rest of the body is the:
A. right atrium
B. right ventricle
C. left atrium
D. left ventricle

27. The largest artery in the body is the:
A. aorta
B. pulmonary
C. carotid
D. femoral

28. The component of the blood that has a primary function of carrying oxygen tissue is:
A. red blood cells
B. plasma
C. white blood cells
D. platelets

29. The pressure created in the arteries when blood is forced out of the heart is referred to as:
A. radial
B. systolic
C. femoral
D. diastolic

30. The substance that regulates acidity and is produced by the kidneys is called:
A. chyme
B. bicarbonate
C. blood
D. testosterone

34. Which of the following components of an ECG represent ventricular repolarization?
A. P wave
B. QRS complex
C. T wave
D. PQ interval

35. Which of the following factors determines preload?
A. peripheral resistance and tension
B. end-diastolic volume and end-systolic volume
C. parasympathetic activity of the ventricles
D. heart rate and venous return

40. The T-Q segment is the time from the end of the T wave to the beginning of the QRS complex which measures the time:
A. of atrial systole.
B. between heartbeats.
C. of ventricular systole.
D. of ventricular diastole.

44. During which phase of the cardiac cycle are all four heart valves open?
A. isovolumetric contraction
B. isovolumetric relaxation
C. ventricular filling
D. none of the above

45. The high compliance of veins allows them to:
A. rapidly change central venous pressure with small changes in blood volume.
B. act as pressure reservoirs
C. provide the driving force for the movement of blood through the vasculature during diastole.
D. accommodate large volumes of blood with little change in pressure.

47. The long-term regulation of arterial blood pressure involves the:
A. release of hormones over a period of minutes
B. stimulation of an increase in urine flow through the kidneys
C. control of peripheral resistance
D. control of blood volume by the kidneys

48. Mean arterial pressure can be increased by all of the following EXCEPT:
A. decreasing volume
B. increasing venous return
C. increasing sympathetic activity
D. increasing blood volume

50. Which of the following does not apply to arterioles?
A. Participate in the regulation of arterial blood pressure
B. Act as pressure reservoirs for maintaining blood flow during ventricular relaxation
C. Major sites of resistance to flow
D. Responsible for regulating the pattern of blood flow distribution to the various organs

53. Gas exchange between air and blood occurs in
A. Alveoli
B. Body
C. Bronchi
D. Trachea

57. In pulmonary edema, the build-up of fluid in the interstitium of the lungs inhibits gas diffusion because:
A. The distance is increased
B. The distance is decreased
C. The alveoli break down
D. The lungs explode

60. Respiratory alkalosis may be caused by
A. Hyperventilation
B. Chronic vomiting
C. Emphysema
D. Diet

66. What type of agent blocks the Na+/Cl- transporter in the nephron?
A. Loop diuretic
B. Aldosterone antagonist
C. Thiazide
D. ADH antagonist

67. ECGs are used to:
A. Monitor the electrical events in cardiac conduction
B. Measure the force of contraction generated by the ventricles
C. Detect the Mean Arterial Pressure
D. Measure stroke volume and cardiac output

68. Which is a major cause of arrhythmias?
A. Heart attack
B. Stress
C. Drugs
D. All of the above

70. Tachycardia can result from activation of which receptor?
A. alpha-1 adrenergic
B. B1 adrenergic
C. alpha-2 adrenergic
D. Muscarinic cholinergic

71. In atrial flutter, the atria contract so quickly that
A. Ventricular filling is compromised
B. The heart stops
C. There is no heart rate
D. Life is not possible

74. When blood pressure drops, baroreceptors signal the brainstem to increase sympathetic output resulting in all of the following EXCEPT:
A. Vasoconstriction
B. Increased contractility of the heart
C. Venoconstriction
D. in heart rate

So there you have it! I sincerely hope that this study guide on Cardio A&P was helpful for you. I’m confident that if you go through these practice questions again and again, it will absolutely boost your knowledge to a whole new level.

If you put in the hard work now by learning this information, your future self will thank you because you will most likely see a lot of this stuff again when you take the board exams. Not only that, you will also use this knowledge on a daily basis throughout your career as a Respiratory Therapist.

Thank you so much for reading! I want to wish you the best of luck and as always, breathe easy my friend.

🔒 And don’t forget, if you need the answers to these practice questions on Therapeutic Procedures, you can get them (for free) by Clicking Here.