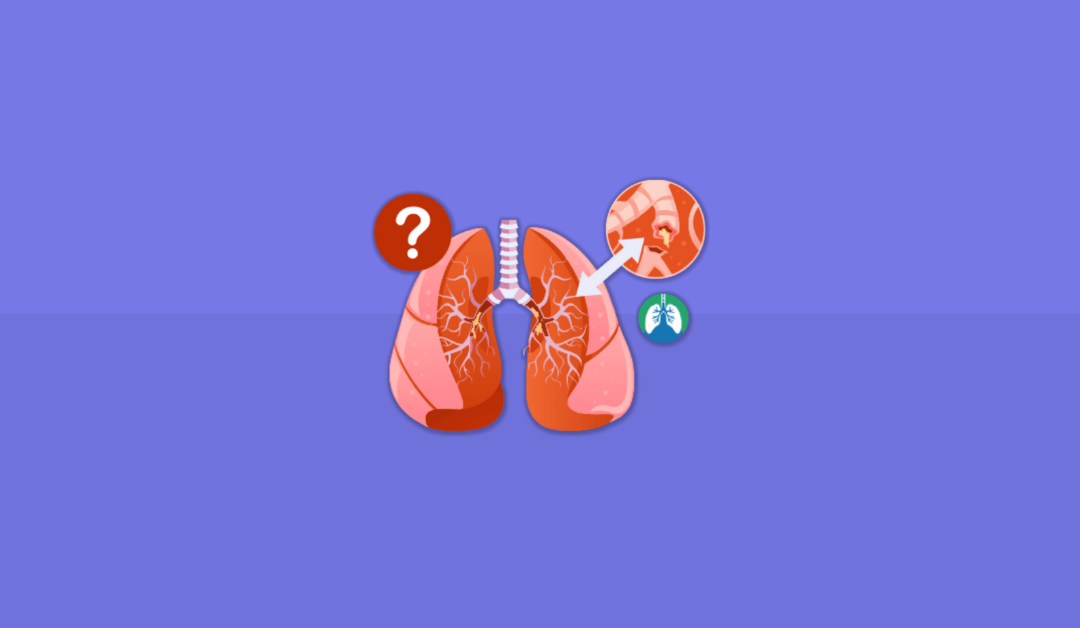 Pulmonary vascular disease is a broad term that can be used to describe any condition that affects the blood vessels in the lungs.

In this article, we will take a look at what pulmonary vascular disease is, what causes it, and how it can be treated. We have provided helpful practice questions for your benefit as well.

What is Pulmonary Vascular Disease?

Pulmonary vascular disease refers to any condition that affects the blood vessels within the lungs. Some examples include:

During normal circulation, blood travels from the heart to the lungs in order to pick up oxygen molecules. Then blood travels back to the heart, where it is pumped to the rest of the tissues in the body to deliver oxygen.

This is an important process required for survival.

However, certain pulmonary vascular diseases can affect this process, which is why this is an important topic for respiratory therapists and medical professionals.

Deep venous thrombosis (DVT) is a condition that occurs when a blood clot forms in one or more of the deep veins in your body.

The clot can then break off and travel to the lungs, where it can cause a pulmonary embolism. This is a serious condition that can be life-threatening if left untreated.

Pulmonary embolism (PE) is a condition in which there is a blood clot or blockage in the lungs that can be life-threatening.

It causes serious problems because the clot prevents oxygen-rich blood from reaching the lungs.

Pulmonary hypertension (PH) is a condition in which the blood pressure in the arteries of the lungs is increased. This can be caused by a number of different conditions, including heart disease, lung disease, and sleep apnea.

What is a Ventilation–Perfusion (VQ) Scan?

A V/Q scan is an imaging test that uses a radiographic substance to assess the ventilation and perfusion of the lungs. By measuring the flow of air and blood within the lungs, it allows for the diagnosis of pulmonary vascular diseases.

However, a V/Q scan is most commonly indicated to help diagnose or rule out a pulmonary embolism. It can also help physicians examine the lungs of preoperative patients.

What is the Role of the Respiratory Therapist in Pulmonary Vascular Disease?

According to Egan’s Fundamentals of Respiratory Care, the respiratory therapist is highly involved in the diagnosis and management of patients with pulmonary vascular disease.

A skilled RT may be the first to recognize the signs and symptoms of DVT, pulmonary hypertension, and pulmonary embolism. Some examples include dyspnea, hypotension, hypoxemia, pleuritic pain, and pedal edema.

In this case, the RT must communicate these findings with the physician and help form a care plan that involves potentially life-saving treatment modalities.

Additionally, the respiratory therapist is involved in the treatment process. Some examples include recommending compression stockings and administering nitric oxide and other inhaled medications for pulmonary hypertension.

1. What is VTE?
It stands for Venous Thromboembolic Disease. It’s a disease category that specifically refers to deep venous thrombosis (DVT) and pulmonary embolism (PE).

2. What is deep venous thrombosis?
A thrombus that originates in the deep veins of the lower extremities

3. What is a pulmonary embolism?
It’s a blockage of a pulmonary artery by foreign matter. The obstruction may consist of fat, air, tumor tissue, or a thrombus that usually arises from a peripheral vein (most frequently
stemming from a DVT).

5. Why is early recognition and treatment essential?
Early treatment is essential because one-third of the deaths caused by PE occur within 1 hour of the symptom onset. The mortality rate in the group of patients with PE that goes undiagnosed is 30%. If the venous thrombosis is recognized and managed, the mortality rate is less than 8%.

6. Where is the point of origin of a pulmonary embolism?
It usually occurs from a DVT of the lower extremities or pelvis in 86% of cases.

7. Most of the time, the clinical presentation of PE and DVT is what?
It is mostly nonspecific. A high index of suspicion is important to make a diagnosis in patients at risk.

9. Pharmacologic choices for prophylaxis include what?
Low-dose subcutaneous heparin, warfarin, LMWH, and dextran

10. What are the mechanical ways to prevent a VTE?
Early ambulation, wearing elastic stockings, pneumatic calf compression, and electric stimulation of the calf muscles

11. The management of VTE includes what?
Anticoagulation therapy with heparin and warfarin

12. What is IPAH?
It stands for idiopathic pulmonary arterial hypertension and is a rare disease that mainly affects young adults. In IPAH, damage to the endothelium of the pulmonary artery alters the balance between vasoconstrictors and vasodilators, favoring vasoconstriction. Thrombosis and cellular proliferation are contributors to pulmonary hypertension.

13. The management of IPAH includes what?
It includes anticoagulation and the administration of vasodilators. Lung transplantation is an option for refractory cases.

14. What is the only treatment that improves survival in patients with COPD and pulmonary hypertension?
Oxygen therapy

16. IPAH is a rare disease that usually affects what group of people?
Young adults

17. What are some pharmacologic options for the prophylaxis of venous thromboembolism?
Low-dose subcutaneous heparin, warfarin, low-molecular-weight heparin (enoxaparin), and dextran; these would be considered types of anticoagulation drug therapy

19. A patient on the mechanical ventilator shows an increased VD/VT ratio. What disorder is most likely responsible?
Pulmonary embolism

20. What do hospitalized patients who are immobile need to prevent thromboembolism?
Prophylaxis

21. What is pulmonary hypertension referred to as in patients with no underlying etiology that can be identified?
Idiopathic Pulmonary Artery Hypertension (IPAH)

22. What is the most appropriate test to confirm the presence of a suspected pulmonary embolism?
Pulmonary angiography

23. What is pulmonary hypertension?
It is an increase in the pressure in the pulmonary arteries that could result from a large number of conditions that affect the lung vessels, lung parenchyma, and/or the heart.

24. What is venous thrombosis?
A formation of blood clots caused by prolonged bed rest

25. Where do most clots form?
In the deep veins of the lower legs

26. What is a pulmonary infarction?
A PE that results in the death of the lung tissue

27. What is pulmonale?
A term that refers to the chronic elevation of pulmonary blood pressure and will eventually result in right heart failure

29. How does a venous thrombosis form?
Most form in the deep veins of the legs; however, some form in the right heart.

30. Which patient population has the greatest risk of thrombosis?
Older patients, bedridden patients, and those with trauma or heart failure

31. How does a pulmonary embolism affect the heart and lungs as they function together?
When blood vessels are blocked in the lung, the heart has to work much harder. If oxygenation is affected, the heart does not get the energy it needs, and cardiac output decreases.

32. What are the primary hemodynamic consequences of a pulmonary embolism?
Increased right heart pressure, increased resistance, and poor cardiac output

33. What are the most common symptoms of a pulmonary embolism?
Dyspnea and pleuritic pain

34. What are the most frequent physical findings associated with a pulmonary embolism?
Tachypnea, tachycardia, and crackles heard in the affected lung

35. What are the most common EKG abnormalities associated with a pulmonary embolism?
Tachycardia and ST-segment depression

36. How is a chest radiograph used in diagnosing a pulmonary embolism?
While the x-ray is frequently abnormal, it is not specific enough. It does, however, help to rule out a pneumothorax and other causes.

37. How can you use an ABG to rule out a pulmonary embolism?
An ABG is not helpful in the diagnosis because associated abnormalities such as hypoxemia and hypercarbia are nonspecific. They are done to assess the patient’s pulmonary and acid-base status, and to guide pulmonary management.

38. What is the gold standard for diagnosing DVT?
Compression ultrasonography

39. What tests are sensitive and reliable in confirming the diagnosis of a pulmonary embolism?
V/Q scans, spinal CT, and pulmonary angiography

40. Will a chest x-ray and ultrasound show pulmonary embolism in the lungs?
No

41. A V/Q scan reveals a defect in the right lower lobe without a corresponding decrease in ventilation. What is most likely the diagnosis?
Acute pulmonary embolus

42. What can be used for pharmacologic prophylaxis of a pulmonary embolism?
Low-dose subcutaneous heparin and warfarin

43. What can be used for mechanical prophylaxis of a pulmonary embolism?
Early ambulation, elastic stockings, and pneumatic calf compression devices

44. What is the standard pharmacologic therapy for an existing DVT or PE?
Heparin, which inhibits coagulation

45. A patient presents to the ED with severe dyspnea and chest pain. Their respiratory rate is 24, minute volume is 14 L/min, and their ABG results are as follows: pH = 7.44, PaCO2 = 37, PaO2 = 100. What is most likely the cause of a normal CO2 when the patient has a large increase in minute ventilation?
The most likely cause is a pulmonary embolus.

46. When are vena cava filters indicated?
When a DVT is present, and the patient has poor reserves. Filters may also be used with chronically immobilized patients and when anticoagulants are contraindicated.

47. What is the importance of providing oxygen to improve the patient’s saturation with pulmonary hypertension?
Supplemental oxygen results in an increased alveolar partial pressure of oxygen, which causes pulmonary vasodilation and reduces PVR.

48. What drugs are used for the treatment of pulmonary hypertension?
Iloprost and Treprostinil

What is the Best Treatment for Pulmonary Vascular Disease?

There is no one-size-fits-all answer to this question. The best treatment for pulmonary vascular disease will depend on the specific condition that is causing the problem.

What are the Long-Term Effects of Pulmonary Vascular Disease?

Pulmonary vascular disease can lead to a number of different complications, depending on the underlying condition. Some possible complications include heart failure, lung damage, and death.

How do you Test for Pulmonary Vascular Disease?

There are a number of different tests that can be used to diagnose pulmonary vascular disease. Some of these tests include chest x-rays, lung function tests, and echocardiograms.

Pulmonary vascular disease is a broad term that covers any condition affecting the blood vessels in your lungs. This could include deep vein thrombosis, pulmonary embolism, or pulmonary hypertension.

If you think you may have a pulmonary vascular disease, it’s important to talk to your doctor. They can help you determine the best course of treatment.

Is Pulmonary Embolism a Vascular Disease?

Pulmonary embolism is a type of vascular disease. It occurs when a blood clot blocks the arteries of the lungs, which can prevent oxygen-rich blood from reaching the lungs.

This can be a serious condition that can lead to complications such as heart failure, lung damage, and death.

How Does Pulmonary Vascular Disease Affect the Lungs?

Pulmonary vascular disease can affect the lungs in a number of different ways, depending on the underlying condition. Some conditions, such as pulmonary embolism, can prevent oxygen-rich blood from reaching the lungs. This can cause serious problems such as lung damage.

Other conditions, such as pulmonary hypertension, can increase the blood pressure in the arteries of the lungs. This can also lead to complications such as heart failure.