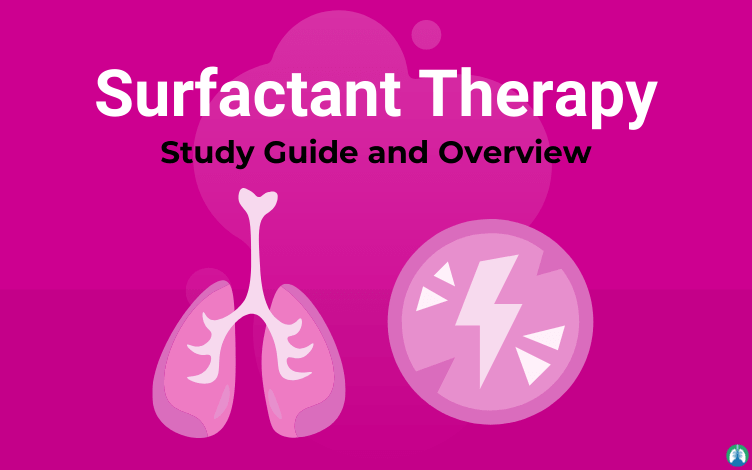 Surfactant replacement therapy is a life-saving treatment method used in preterm infants who were born with a surfactant deficiency. Developing an understanding of this topic is a requirement for Respiratory Therapists, especially those who want to work in neonatal care.

We created this study guide to (hopefully) make the learning process easier for you. Below, we’ve listed out some helpful practice questions for your benefit as well. So, if you’re ready, let’s get started.

Surfactant is a substance that forms a layer over the surface of alveoli in the lungs to reduce surface tension and prevent alveolar collapse.

What is Surfactant Replacement Therapy?

Surfactant replacement therapy is a treatment modality that is often used in preterm infants with surfactant deficiency that involves the deliverance of exogenous surfactant in order to improve alveolar expansion.

Respiratory Distress Syndrome (RDS) is a condition in preterm infants born less than 28 weeks gestational age that results in a surfactant deficiency. These infants require the administration of exogenous surfactant until their lungs mature enough to produce it on their own.

As previously mentioned, this prevents alveolar collapse so that breathing and gas exchange can occur. Surfactant replacement therapy is usually supplemented with oxygen therapy as well to treat or prevent hypoxemia.

This book (in paperback format) has sample TMC Practice Questions on Neonatal/Pediatric care.

2. What are two administration techniques of surfactant?
Prophylactic and rescue.

3. What type of surfactant technique is administered to at-risk infants immediately after birth?
Prophylactic.

4. What type of surfactant technique is administered to infants after they demonstrate signs and symptoms of RDS?
Rescue.

6. How is surfactant replacement therapy administered?
It is instilled directly into the trachea and the infant is positioned to allow gravity to aid in distributing the surfactant throughout the lung.

9. What is another name for surfactant beractant?
Survanta (Bovine).

10. What is another name for surfactant poractant alfa?
Curosurf (Porcine).

12. What surfactant proteins are important components of innate immunity for inhaled pathogens?
A and D.

13. What underlies the pathophysiology of many respiratory disorders like RDS, ARDS, and Meconium Aspiration Syndrome (MAS)?
Surfactant deficiency, dysfunction, or inactivation.

16. What is the most abundant component of surfactant?
Dipalmitoylphosphatidylcholine (DPPC).

17. Surfactant inactivation and dysfunction have not been described in what disease?
Congenital heart disease.

20. What surfactant-associated protein deficiency is fatal in infancy without lung transplantation?
SP-B deficiency.

21. What surfactant proteins are important in defense against infection?
SP-A and SP-D.

22. What is the most common complication of surfactant administration in the pre-term neonate?
Hypotension.

23. What are the benefits of surfactant replacement therapy in infants with RDS?
Reduction in the severity of RDS and reduction in the incidence of air leaks – pneumothorax and pulmonary interstitial emphysema.

25. What radiographic findings are typical of a child with RDS?
Atelectasis, air bronchograms, and ground glass pattern.

26. What does surfactant therapy treat?
It treats and reduces respiratory distress syndrome.

31. Describe the administration of surfactant drugs?
It is administered via the endotracheal tube. Head should be elevated and do not suction for 2 hours after giving.

32. When should a surfactant be discontinued?
If child dusky, agitated, bradycardic, O2 sat less than 95%, and CO2 less than 30 mm Hg.

33. What is the function of surfactant?
It reduces surface tension and increases lung compliance. Also, the physiological condition is maintained by a normal surfactant level.

34. What is the composition of surfactant?
Type II pneumocytes produce surfactant– 90% lipids and 10% protein.

35. What is the most important component of surfactant?
DPPC (Dipalmitoylphosphatidylcholine).

36. If there were no surfactant, what two things would happen?
Without surfactant every breath would require a considerable amount of pressure to expand the lung with each inspiration ( -80 to -90 cmH20). The lungs would rapidly collapse during exhalation.

37. What should be given to expectant mothers who are in the 24th-34th week of pregnancy who are at risk of preterm delivery within 7 days?
Systemic corticosteroids.

39. What is the best measurement to determine lung maturity?
PG– PG and lecithin increase while sphingomyelin decrease during lung gestation.

40. What are the benefits of administering prophylactic surfactant replacement therapy to preterm infants in the first 15 minutes of birth?
It decreases the risk of mortality, reduces the threat of pneumothorax, and reduces the risk of developing interstitial emphysema.

41. What is the beginning dose and delivery of surfactant?
75-100 ml/kg given through the ETT which delivers as fast as possible while turning the newborn.

42. What should be monitored during the administration of surfactant?
Heart rate, oxygenation (cyanosis, bradycardia, reflux, airway obstruction), and presence of surfactant in ETT.

43. What is included in synthetic surfactants?
EXOSURF- drug that is no longer marketed, PUMACTANT, and SURFAXIN.

44. What is included in modified natural surfactants?
Survanta, Infasurf, and Curosurf.

45. What are the inactivators of surfactant?
Pulmonary hemorrhage, meconium aspiration syndrome, and pneumonia and sepsis.

46. What are the findings from use of surfactant?
Congenital diaphragmatic hernia (very little benefit from surfactant), Extracorporeal membrane oxygenation (could benefit), ARDS (some trials showed benefit), Viral bronchiolitis, Asthma, CF (no evidence to show if beneficial).

47. What does surfactant do?
It keeps alveoli from collapsing.

48. When must surfactant be given?
Within the 1st hour and before hour of birth.

49. How is surfactant given?
Usually through the ET tube.

50. How often is surfactant given?
4 times within a 24-hour period.

51. How will you confirm that the lungs are open?
Chest X-ray.

52. What else may be needed in addition to surfactant?
C-pap machine or intubation.

54. Where is surfactant made and stored?
Type II alveolar cells – electron-dense bodies (lamellar bodies) where surfactant is stored in a highly structured way before being secreted.

55. What is the non-polar tail of phospholipids and what is it derived from?
Carbon chain length up to 18. It is derived from glucose and/or glycerol.

56. What are some examples of polar phospholipid heads?
Choline, Inositol, Serine, Glycerol, and Ethanolamine.

58. What is the use of SP-A and D?
Regulatory and host defense. Large hydrophilic.

59. What is the use of SP-B and C?
Formation and stabilization of phospholipid monolayer. Small lipophilic.

60. How is the monolayer formed?
In lamellar bodies, it needs to be broken into tubular myelin which needs SPA, B and Ca2+. SPA, B and C form monolayer.

62. What happens to phospholipids just before degradation?
Taken up by type II cells. Transported to ciliated airways due to surface tension gradients.

64. What happens after phospholipid degradation?
Macrophage phagocytosis. Epithelial reabsorption into either lymph or blood.

65. What does surfactant do?
Phospholipids moving into the surface layer aren’t attracted to each other, so they reduce surface tension (intermolecular forces between water molecules).

66. What is compliance defined as?
The degree to which the lung will distend per unit change in pressure.

67. What are some of the key functions of surfactant?
Fluid balance, Host defense, and Compliance. It also reduces and maintenance of liquid plugs, reduces adhesion, aids in hydration and rheology mucus.

68. What does surfactant do in terms of fluid balance?
Reduces the tendency for fluid to be sucked into airspace.

69. How does surfactant maintain fluid balance?
Rigid alveoli structure wants to collapse – creates slightly negative pressure around it which creates a hydrostatic pressure gradient to draw fluid into the lung.

70. What does surfactant do in terms of host defense?
Movements of particulate matter towards ciliated regions aided by surface tension gradients.

71. How are the surfactant proteins involved in host defense?
Both SPA and D bind to pathogens to promote action of macrophages in an immune response.

75. What congenital diseases is surfactant involved in?
Cystic fibrosis and surfactant protein B deficiency (lethal).

78. What was used in the 70s for NRDS?
Specialized neonatal ventilators.

79. What was a key development in NRDS?
Antenatal steroids.

80. What was introduced in the 90s for NRDS?
Exogenous pulmonary surfactant therapy.

83. What is the brand name of beractant?
Survanta.

84. Which surfactant is a modified natural surfactant?
Beractant.

85. Which surfactant is from a calf?
Calfactant.

86. Which surfactant is from porcine?
Poractant alpha.

87. Which surfactant is from bovine?
Beractant.

88. Which surfactant cannot be used for prophylaxis?
Poractant alpha.

89. At what age can you use calfactant for prophylaxis?
Less than 29 weeks.

91. What is the recommended dose of calfactant?
3 mL/kg.

93. What is the recommended dose of beractant?
4 mL/kg.

94. Which surfactant is recommended to be used within 30 minutes of birth?
Calfactant.

95. Which surfactant is recommended to be used within 15 minutes of birth?
Beractant.

96. Which surfactant has an age limit associated with rescue therapy?
Calfactant (less than or equal to 72 hours of age).

97. Which surfactant can be administered through side-port of ETT adapter via ventilator?
Calfactant.

98. In which surfactant is warming to room temperature not necessary?
Calfactant.

99. In which surfactant may gentle swirling of the vial be necessary?
Calfactant.

100. Which surfactant is the least expensive?
Calfactant.

Surfactant replacement therapy is a critical treatment modality in neonatal respiratory care. Hopefully, this study guide can help you learn the basics of this important topic.

We have a similar guide on all of the most common Neonatal Respiratory Disorders that I think you will enjoy. Thanks for reading and, as always, breathe easy my friend.