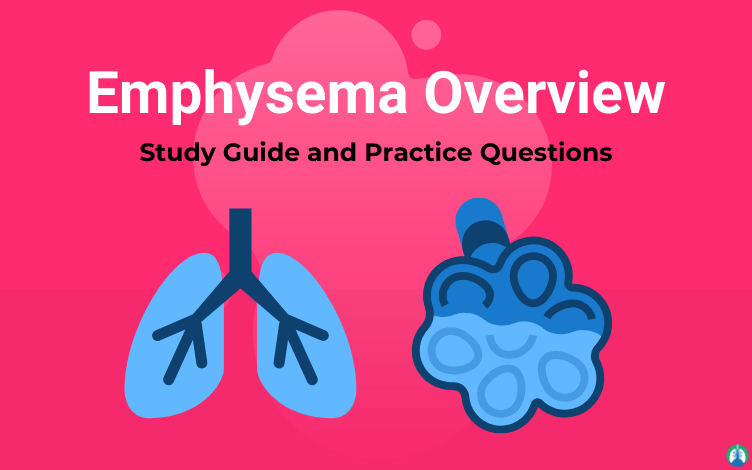 Emphysema is a type of Chronic Obstructive Pulmonary Disease (COPD) that affects millions of people in the United States each year. As a Respiratory Therapist or medical professional, it’s a condition that you must be familiar with.

In this article, we’re going to give you an overview of Emphysema to help make the learning process easier. We’ve also included some practice questions as well for your benefit. So if you’re ready, let’s get started.

Emphysema is an obstructive disease that results in increased lung expansion due to air trapping. It causes irreversible damage to the alveolar walls which causes permanent enlargement of the air spaces distal to the terminal bronchioles.

It’s a type of COPD, chronic bronchitis being the other.

What are the Causes of Emphysema?

The most common causes of Emphysema include the following:

In the United States, tobacco smoke is the leading preventable cause of Emphysema.

What are the Signs and Symptoms of Emphysema?

The signs and symptoms of Emphysema can vary in severity from person to person. Here are some of the most common examples:

Keep in mind that other signs and symptoms of Emphysema exist. These are just the most common examples.

How is Emphysema Diagnosed?

There are many things to look at when diagnosing a patient with Emphysema. Here are the most common examples:

The physician may recommend testing for alpha-1 antitrypsin deficiency in addition to the tests listed above.

What is the Treatment for Emphysema?

The goal of treating Emphysema is to increase the patient’s life expectancy and quality of life while decreasing the number of exacerbations and hospital visits. Here are the general methods for treating COPD:

Again, patients with Emphysema are treated on a case by case basis and the methods can vary depending on the severity of their symptoms.

This book (in paperback format) had sample TMC Practice Questions on pathology and diseases.
Buy from Amazon
As an affiliate, we receive compensation if you purchase through this link.

1. What is the definition of emphysema?
It is defined pathologically as the presence of permanent enlargement of the alveoli where lung tissue is damaged and air-trapping occurs. It causes elastin destruction with an abnormal weakening and permanent enlargement of air spaces distal to the terminal bronchioles with destruction of the alveolar walls and pulmonary capillaries.

2. What are some of the causes?
Smoking, chronic irritation and inflammation, infections, pollutants, long-term exposure to airborne irritants and alpha one anti-trypsin deficiency.

3. What are the two types of emphysema?
Centrilobular or centroacinar, and or .

4. What type is more common?
Centrilobular.

5. What is the most common cause of emphysema?
Smoking.

6. What parts of the lungs does panlobular emphysema affect?
Respiratory bronchioles, alveolar ducts, and alveolar sacs which are destroyed by elastase.

7. What parts of the lungs does centrilobular emphysema affect?
Respiratory bronchioles and upper lobes.

8. What happens in the pathophysiology of emphysema?
The alveoli and the small distal airways are affected by this disease that is followed by the larger airways. The bronchioles lose their stability which leads to the collapse the airways resulting in gas to be trapped distally. It develops when the production and activity of ant protease are not sufficient to counter the harmful effects of excess protease production. Destruction of the alveolar walls and the breakdown of elastic tissue and collagen is the result of this. In addition, destruction of alveolar sacs, loss of recoil, increased compliance (floppy airways), exhalation incomplete and requires energy, V/Q mismatch, chest and heart becomes long and narrow, and diaphragm flattens.

11. What are the tiny air sacs in lungs called?
Alveoli.

12. What will be seen on a chest x-ray and CT scan of patients with emphysema?
Hyperlucent with black lung due to gas trapping and increase functional residual capacity bulla and/or blebs, prominent pulmonary arteries, flatten diaphragm, blunted angle, and bullous lesions.

13. What can immunizations do?
They can help to prevent the disease.

14. What is a bulla?
Bulla is air pockets greater than one centimeter in the lung parenchyma.

15. What is a bleb?
is the accumulations of air within the layers of the visceral pleura. This is usually smaller than bulla.

18. What medication or treatment is available for alpha one antitrypsin patient?
Administration of .

19. What is panlobular emphysema?
Panlobular () is the most severe but less common type. It is the abnormal weakening and enlargement of all alveoli distal to the terminal bronchioles, respiratory bronchioles, alveolar duct and alveolar sacs.

20. What is Centrilobular emphysema?
Centrilobular is the most common type. Its form begins at the respiratory bronchioles and spread peripherally and involves the upper half of the lungs.

u21. What are the major pathological changes associated with emphysema?
Changes include permanent enlargement and destruction of the air spaces distal to the terminal bronchioles, destruction of pulmonary capillaries, weakening of the distal airways primarily the respiratory bronchioles and air trapping and hyperinflation

22. What is Bullous Emphysema?
It is also known as BLS, occurs in one or both lungs and is characterized by the presence of one or several abnormally large air spaces surrounded by relatively normal lung primarily on distal airways involving alveolar ducts and sacs. Some causes: shows inspiratory flow rates as normal but cannot get air out (gas trapping).

23. How is emphysema similar to chronic bronchitis?
It is very similar, except the airways have obstruction due to the reduced elastic recoil of the lungs. The inspiratory flow rates are normal if the patient has pure emphysema. The patient has dyspnea initially only on exertion with it intensifying at variable rates until shortness of breath at rest.

25. What is the classification of patients with emphysema?
Patients with this disease are classified as a pink puffer. The show pursed-lip breathing. Patient has both a red complexion and rapid respiratory rate and has a barrel chest. They use accessory muscles of inspiration.

27. What happens to alveolar walls in emphysema?
It enlarges and then degenerates.

29. What kind of damage of the alveoli does emphysema cause?
Permanent and irreversible.

30. How would ventilation be affected by emphysema?
Easy compliance and low recoil manifesting as hard to breathe out and patients will often pant when they breathe.

31. How would emphysema affect gas exchange?
Less surface area in alveolar walls which will cause the patient to need oxygen therapy.

32. How will chronic obstructive pulmonary disease affect gas exchange?
It is harder to breathe out, there is a build-up of carbon dioxide in lungs resulting in acidosis.

33. What is centrilobular/centriacinar emphysema?
/Centriacinar is the abnormal weakening and enlargement of the respiratory bronchioles and alveoli in the proximal portion of the acinus. It is related to inflammation.

34. What is panlobular/pancinar emphysema?
Panlobular/Panacinar is an abnormal weakening and enlargement of all air spaces distal to the terminal bronchioles. It is related to deficiency.

35. What are the risk factors of emphysema?
Alpha1-antitrypsin deficiency; disorder affecting the lungs, liver, and rarely the skin; smoking; age; second-hand smoke; occupational exposure and pollution.

36. What is the risk factor for panlobular emphysema?
Severe deficiency of Alpha1-antitrypsin poses a strong risk factor.

39. What is the rarest cause of emphysema?
Asthma.

40. What is referred to as a Hoover’s sign?
Hoover’s sign is the inward movement of the lower lateral chest wall during each inspiration that indicates severe hyperinflation.

41. Will all smokers developing emphysema?
No, only if you’re genetically susceptible.

42. What is the rare inherited deficiency of the protein that protects the elastic function of lungs?
Alpha-1 antitrypsin deficiency; seen in emphysema.

43. How is the onset of this disease?
It is usually a slow onset.

44. What is one symptom you experience in the later stages of emphysema?
Frequent lung infections.

45. What is the pathogenesis of emphysema?
Slowly damages the alveoli (air sacs) in the lungs and makes it progressively harder to breathe. The inner walls of the air sacs weaken and rupture.

46. What is the problem with exhaling with emphysema patients?
The damaged alveoli do not work properly, the old air becomes trapped in lungs and it prevents oxygen-rich air from flowing in.

48. When should a patient with potential emphysema see a doctor?
It is advisable to see a doctor when experiencing unexplained increase in shortness of breath at rest or during activity that interfere with daily activities.

49. What are the four pathophysiologies behind emphysema?
It has these pathophysiologies: lungs respiratory defenses are broken down by foreign invaders from cigarette ingredients; inflammatory immune cells appear and transport antigens to the bronchial lymphatic tissue layer. Macrophages release enzymes that destroy the lungs epithelial barrier; loss of alveolar wall decrease in elastic recoil in lungs that reduces airflow; and, loss of alveolar supporting structures airway narrows which further limits airflow.

51. What position is best for clients with emphysema under normal circumstances?
Semi-fowlers or higher.

52. What flow rates of oxygen are appropriate for a patient with emphysema?
Low flow — <2.5 L/min; never exceed 2.5L in chronic obstructive pulmonary disease. This is to prevent to loss of the hypoxic drive.

53. What position is best on patients with emphysema that has a severe dyspneic episode?
Sitting upright with arms folded on the overbed table.

54. What will you observe on the hands of the client with emphysema?
Clubbing of the fingernail beds.

55. What is the characteristic of the alveoli in this disease?
Over-enlarged and under-ventilated so that air is trapped in alveoli.

56. What is most associated with the development of emphysema is?
A history of smoking.

57. What are manifestations of emphysema?
The appetite decreases while the weight decreases and the anterior-post diameter of the chest increases.

58. What can be visibly seen on patients with emphysema?
They have grunting, pursed lips, and rapid breathing.

59. What is the increase in anterior-posterior diameter of emphysema typically called?
Barrel chest.

60. What dietary prescription is most appropriate for a patient with emphysema?
Frequent small meals to prevent tiring.

61. What fluid order should the emphysema patient have?
3 liters of fluid per day.

62. How will patients with emphysema appear?
Cyanotic (pink puffer).

63. What is the life expectancy after diagnosis?
5 years.

65. What is the first symptom seen with this disease?
Shortness of breath.

66. What is a physical therapy for lungs that improves symptoms of emphysema?
Pulmonary rehabilitation.

67. What can you do to treat a patient with low oxygen saturation levels?
Provide oxygen therapy.

68. What is the treatment for someone with severe emphysema?
Lung volume reduction surgery.

69. What is cyanosis?
A blueish appearance of the skin. This includes the fingernails and lips as well.

So there you have it. Hopefully you now have a better understanding of Emphysema and are more knowledgeable when it comes to treating patients with this condition.

Remember, repetition is key. Be sure to read through this information multiple times if necessary. We have a full guide on Chronic Bronchitis as well, so definitely be sure to check that one out.