6 Outlandish Reasons Why Respiratory Therapy is a Growing Field 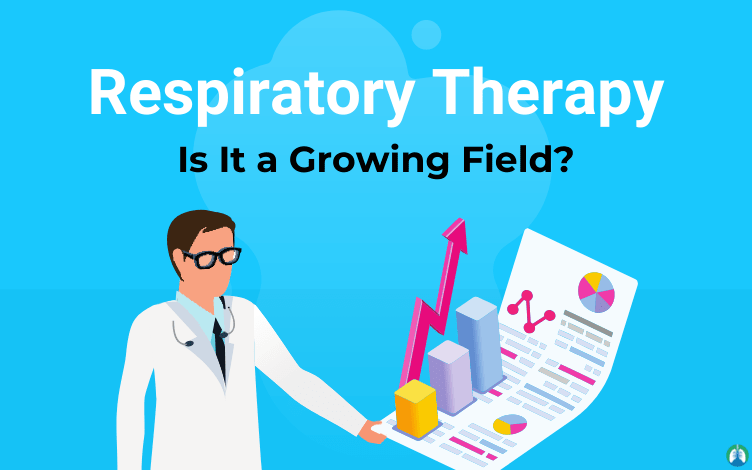 Respiratory Therapy is one of the hottest careers in the medical field, yet unfortunately, no one seems to be talking about it. Hard-working Respiratory Therapists are a major part of the healthcare team and too often go unnoticed. With that being said, the field continues to grow each and every year. In this article, we are going to dive into some of the reasons why Respiratory Therapy is a growing field.

According to the Bureau of Labor Statistics, the growth within respiratory therapy is on the move. Beginning in 2014, statistics show that jobs in the field are predicted to grow at an above-average rate of 12% over the next 10 years. But why?

Let’s discuss some of the more out-of-the-box and outlandish reasons why that is:

#1 – Humans are living longer than ever before.

As technology in healthcare becomes more advanced each year, people are just simply living longer than they used to. And with this in mind, it’s no surprise that the older in  that a person becomes, the likelier they are to develop breathing problems.

Sleep apnea has become a significant health issue in the United States. Roughly 22 million Americans suffer from this condition. This disorder occurs when someone stops breathing while they are asleep. Such a problem can lead to a number of different medical issues, fatigue, and in some cases, even death.

Thankfully in today’s world, finding the necessary help to face these problems is easier than in years past. However, more and more people are affected by this disorder each and every year. As such, respiratory therapists will be needed to treat a growing demand  sleep apnea patients.

#3 – Smokers are transitioning into Vapers.

Many people around the world are switching from smoking to vaping because they believe that it is a healthier alternative. News flash, it’s not. Well, not necessarily anyway, because vaping definitely has its pitfalls as well.

Bronchiolitis obliterans, or less formally known as popcorn lung, is what occurs when the airway is compromised. This makes it harder and more difficult to breathe. Also, this disorder can get bad enough that the sufferer could die or be forced to get a lung transplant. Studies have been published that links the flavoring in e-cigarettes to the chemicals that can cause this popcorn lung condition.

So while vaping probably is not as hazardous as smoking, it comes with its own set of issues as well. This is definitely a reason to think that more Respiratory Therapists will be needed as the number of vapers is on the rise.

As awareness of respiratory diseases such as COPD, emphysema, and bronchitis increases, more people are seeking to prevent them from occurring in their lives. Respiratory Therapists can play a huge role here. This prevention plan relies directly on the shoulders (and brains) of Respiratory Therapists. Our services will need to include education, treatment, exercises, medications, routine check-ups, and more.

This prevention model is already becoming popular today and will continue to become a bigger part of the job requirements for Respiratory Therapists in the future.

#5 – Our Environment is changing.

With the climate changing rapidly and the environment arguably diminishing, the air we breathe isn’t getting any cleaner and healthier as the years go by.

As the atmosphere becomes more polluted, the air we breathe becomes more tarnished. Our bodies aren’t physiologically designed to handle such pollutants, and this will likely cause more respiratory-related issues to occur over time within the population.

While society today is working on ways to enhance the quality of our environment and reduce the underlying causes, scientists still believe the air we breathe is becoming more dangerous every year and our lungs more susceptible to damage.

This is a sure sign that more Respiratory Therapists will be needed as patient conditions will worsen as the years go by.

With healthcare programs in place, finding affordable solutions to medical problems has never been easier. This includes none other than, Respiratory Therapy.

A big part of the reason Respiratory Therapy is growing at such a rate today is  many more patients are covered medically. With the massive increase in potential patients, the field has had to expand to meet its demand.

Previously, Respiratory Therapy was much less affordable and accessible to portions of the population. Many people were simply not covered for the ongoing treatments and check-ups. Even if it was the best option for care, it simply wasn’t in the cards for a lot of people.

But now, medical insurance is widely available, and a good portion of those people who couldn’t afford it now have immediate access. You guessed it; this means more Respiratory Therapists will be needed to provide care for this influx of patients.

The field of healthcare is definitely growing and will continue on that path for years to come, and Respiratory Therapy will continue to be a big part of that growth. While there are surely many other factors to take into consideration, this article shows just a few out-of-the-box reasons why Respiratory Therapy is a growing field, now and forever.

Are you considering a career as a Respiratory Therapist? Respiratory Therapy is a better field than people give it credit for. For the reasons stated above, it’s clear that opportunities are here now and will continue to be there for years to come.

Respiratory Therapist vs Nurse: Which job is better?

Best States to Work as a Respiratory Therapist

How Much do Respiratory Therapists Make?

How to Deal With Difficult Patients (Hospital Edition)

Top 16 Required Skills for being a Respiratory Therapist