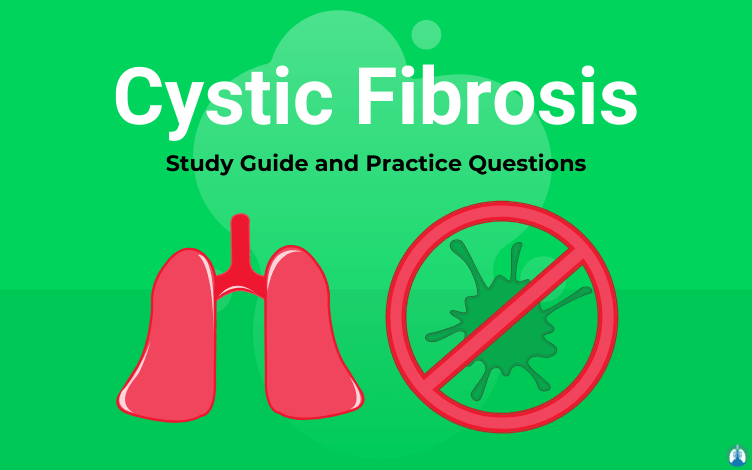 In this guide, we’re going to provide an overview of the pathophysiology of Cystic Fibrosis. We’re going to cover the causes, management, diagnosis, and treatment.

Not to mention, we’ve also provided some helpful practice questions as well for your benefit. So if you’re ready, let’s get started.

Cystic Fibrosis is a genetic disease that is characterized by abnormally large amounts of thick secretions and pancreatic insufficiency that causes lung infections and difficulty breathing over time.

It also causes increased sodium and chloride concentration in the sweat glands.

What are the Signs and Symptoms of Cystic Fibrosis?

The following are the most common symptoms that are present for patients who have been diagnosed with Cystic Fibrosis:

While these are the most common symptoms, the Cystic Fibrosis disease and severity of symptoms can vary widely from person to person.

How is Cystic Fibrosis Diagnosed?

Cystic Fibrosis can be diagnosed with a variety of different methods, including the following:

It can also be helpful to look at the patient’s chest x-ray, ABG results, Pulmonary Function Tests (PFT), and Complete Blood Count (CBC).

What is the Treatment for Cystic Fibrosis?

As previously mentioned, the severity of the disease differs from person to person. This means that the treatment modalities will vary as well.

However, in general, here are the common treatment methods:

Common medications include bronchodilators, mucolytics such as Pulmozyme, and inhaled antibiotics such as Tobramycin.

Most patients also benefit from pancreatic digestive enzyme supplements and CFTR modulators as well. Lastly, CF patients can benefit from a personal fitness regimen as well in order to boost strength and energy levels.

Cystic Fibrosis is a hereditary disease that is caused by defects and a mutation in the CF transmembrane conductance regulator (CFTR) gene.

This gene is what controls and regulates the movement of sodium and chloride ions across the membrane of epithelial cells. As ion transport is affected, the sodium and water contents of the body become out of balance. It results in decreased secretion of chloride and increased reabsorption of water and sodium.

This ultimately causes an accumulation of thick mucus throughout the body which leads to lung infections, obstructed airways, and difficulty breathing over time.

This book (in paperback format) had sample TMC Practice Questions on pathology and diseases.
Buy from Amazon
As an affiliate, we receive compensation if you purchase through this link.

1. What is cystic fibrosis?
It is a hereditary disease characterized by lung congestion and infection along with malabsorption of nutrients by the pancreas. A multifaceted disease caused by genetically defective chloride ions in the apical surface of the epithelial lining resulting in impaired chloride-flow across membranes through the cystic fibrosis conductance regulator (CFTR) channel.

2. What happens in cystic fibrosis?
Mucus clogs the lungs leading to chronic respiratory infections and mucus obstructs the ducts of the pancreas preventing digestive enzymes from reaching the intestines.

3. What system is cystic fibrosis a dysfunction of?
The exocrine system.

5. Which ethnicity is mostly like to be a carrier of the Cystic Fibrosis Transmembrane (CFTR) gene?
Caucasian/white people are most likely to be the carrier of this gene.

6. What would the x-ray look like for patients with cystic fibrosis?
Translucencies, enlarged heart, and a flattened diaphragm.

8. What two infections do we mainly see present in cystic fibrosis?
Staphylococcus Aureus and Pseudomonas.

10. Aside from respiratory issues, what other clinical condition does a cystic fibrosis patient have?
Anemia, appendicitis and cystic fibrosis-related diabetes (CFRD) due to the scarring of the pancreas. Studies show that 75% of adult suffering from cystic fibrosis has a gallbladder disease, gastroesophageal reflux disease (GERD), malnutrition, growth failure, infertility, pancreatitis and meconium ileus.

12. What are the common signs and symptoms of cystic fibrosis?
Salty sweat, residue on skin and/or clothes, abdominal distention and cramping, fatty stools and malnutrition even with ravenous appetite (FTT). Pulmonary indications include advanced chronic obstructive pulmonary disease (COPD), hypercapnia and severe hypoxemia when the disease is very advanced.

13. How can you manage patients with cystic fibrosis?
Most patients suffering from cystic fibrosis are treated with , sympathomimetics, percussion and postural drainage (P&PD). In addition, positive expiratory pressure (PEP), flutter, vest therapy, hypertonic saline xanthines must also be considered an important option in managing this disease. Another way to bronchial dilate is to take steroids and ibuprofen that reduces fifty percent of forced expiratory volume in the first second (FEV1).

14. What are other treatments available for cystic fibrosis?
Lung transplant, gene replacement, vitamins, food supplements and oxygen (when necessary).

15. What is the prognosis for cystic fibrosis patients?
The disease has no cure but can be managed. According to a study conducted in 2017, the life expectancy of a person suffering from this condition is 37.5 years compared to 32 years in 2000 and 36.5 years in 2009. This shows that treatment and management for this disease continue to develop effectively.

18. What kind of disease is cystic fibrosis?
It is an inherited obstructive disease.

19. Where can you find the defective gene for cystic fibrosis?
It is found on Chromosome 7.

20. What are the commonly cultured organisms in the airways of the patients with cystic fibrosis?
They are , , and aureus.

22. What common indication of a person with cystic fibrosis?
They present as malnourished, with excessive secretions, and suffering from meconium ileus (bowel obstruction).

23. What symptom of cystic fibrosis common to men?
Male infertility.

28. What is the cause of clubbing?
Clubbing is mainly caused by chronically low levels of oxygen.

29. What is the median age of survival of the people with cystic fibrosis?
37 years.

31. What are the four commonly used therapies in the management of cystic fibrosis?
Oral enzymes and vitamins, Antibiotics, Postural drainage, Expectorants.

32. A cystic fibrosis patient appears malnourished even on what kind of diet?
A high-calorie diet.

34. A cystic fibrosis patient in generally good condition may be a candidate for what surgical procedure?
Lung transplant

37. Vocal and tactile fremitus is related to trapped air. Trapped air causes tactile and vocal fremitus to be?
Decreased

38. What is a common non-respiratory clinical manifestation of cystic fibrosis?
Sinusitis.

39. What supplementary vitamins does cystic fibrosis patient must have?
A, E, D, and K.

41. The Respiratory Therapist may aerosolize and administer drugs that helps thin secretions. What are the two drug options that can be used?
DNAse or Pulmozyme.

42. What contributes to bone disease among individuals with cystic fibrosis?
Malabsorption of vitamins D and K, failure to thrive, delayed puberty, physical inactivity and use of corticosteroid medicines.

45. How can the enzyme tablets be administered to infants and young children?
It can be mixed with soft acidic food.

46. What are the side effects of oral corticosteroids, a steroid used among children with persistent severe asthma?
Glucose intolerance should be monitored as it may lead to overt cystic fibrosis-related diabetes. Growth failure and hypertension are other side effects of this.

49. Eighty-five percent of the total population of patients with cystic fibrosis has this condition?
Pancreatic insufficiency

51. What lung and upper respiratory tract diseases are associated with cystic fibrosis?
A person suffering from cystic fibrosis will show bacterial infection that occurs from of lung defense mechanisms. They will also experience intense inflammation. Airway destruction specifically bronchiectasis and will also be present. They will also suffer from mucus plugged airways, goblet cell hyperplasia and their cilia function will be disrupted.

53. What is the most common amino acid that is deleted from the channel protein in cystic fibrosis?
Phenylalanine changes the structure of the CFTR (cystic fibrosis transmembrane conductance regulator) protein (channel) in a way that it can no longer transport chloride.

54. What is the result of impaired Cl (chloride) – flow due to the defective chloride ions and their ability to flow across membranes?
Disordered secretion and reabsorption resulting in higher than normal chloride levels in sweat and thicker than normal mucus in tract, gastrointestinal tract, pancreatic ducts, bile ducts and reproductive tract.

55. What cellular mechanism takes place within the sweat glands of cystic fibrosis patients?
There is an inhibited chloride reabsorption that results in inhibited sodium reabsorption which makes sweat saltier than normal.

59. What two organs are greatly affected by the thickened mucus in cystic fibrosis patients?
Lungs and pancreas.

61. How does mucous affect cilia?
Flattens the cilia

62. How are lungs affected by cystic fibrosis?
Decreased chloride secretion from epithelial lining cells in the airway lumen cause thinning of lining surface of the airway leading to impaired mucociliary clearance. This leads to chronic infections, bronchiectasis, , bronchial stenosis, fibrosis, and mucous plugging.

Pulmonary function is often preserved until adolescence. A steep decline can occur at this point. By late adolescence, most patients have a daily productive cough.

Airway infection with is the primary pathogen. Staphylococcus aureus and Staph aureus are also common. Other lung pathogens include allergic bronchopulmonary and nontuberculous mycobacterial infections.

64. How are sinuses affected by cystic fibrosis?
Nasal and sinus polyps

65. How is cystic fibrosis manifested in sinuses?
Pan-sinusitis and nasal polyposis

66. How is cystic fibrosis diagnosed?
If newborn screening is positive, a cystic fibrosis genetic panel is done followed by a sweat chloride test and a complete CFTR exon sequencing.

67. What mucolytic agents are given for cystic fibrosis?
Dornase alfa and hypertonic saline.

68. What is the brand name for dornase alfa?
Pulmozyme.

69. How does Pulmozyme work?
It breaks down extracellular DNA, decreased mucus viscosity and increased expectoration of mucus.

72. What is tobramycin dose?
10 mg/kg/dose IV q 24h. Use traditional dosing in patients with renal dysfunction.

73. When are tobramycin levels checked?
Two and ten hours after infusion. Peak concentration is 20-30 mcg/mL.

74. What is the pathophysiology of cystic fibrosis?
Mutation in chloride transport leading to thick secretions from the exocrine glands and blockage of secretory ducts.

78. What will be the result of the PFT (pulmonary function test) in cystic fibrosis?
Decreased airways leading to airflow obstruction.

79. What can be observed in the chest x-ray of a person suffering from cystic fibrosis?
Hyperinflation and increased pulmonary markings.

80. What seen in severe cystic fibrosis?
Hypoxemia and hypercapnia.

82. What is the gold standard management treatment for cystic fibrosis?
Lung transplant.

84. How do you get a diagnosis of cystic fibrosis?
Sweat chloride, CFTR gene analysis, nasal electrical potential difference, newborn screening

85. What medications are used to treat cystic fibrosis?
Short-acting beta-agonists, hypertonic saline, Vest/flutter/etc, Pulmozyme (not to be mixed) TOBI (always given last).

So there you have it. I hope that you now have a better understanding of Cystic Fibrosis, including the pathophysiology, diagnosis, causes, and symptoms. As a medical professional, this is definitely a condition that you must be aware of. Hopefully use can use this study guide to make the learning process easier on yourself.

Airway Clearance Therapy is the most common method of treating patients with CYstic Fibrosis. We have a full guide on that topic as well that I think you will enjoy. Thank you so much for reading and as always, breathe easy my friend.