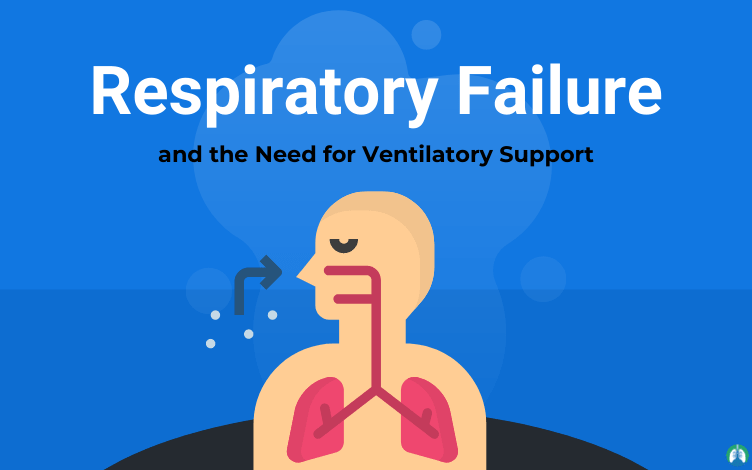 Respiratory failure is a term that refers to inadequate gas exchange. It means that the patient has an inability to take in enough oxygen or remove enough carbon dioxide from the body.

It’s a clinical problem that all Respiratory Therapists and medical professionals must be able to identify and treat. In severe cases, intubation and mechanical ventilation would be indicated to assist with oxygenation or ventilation.

This study guide covers the basics of respiratory failure and contains practice questions on this topic for your benefit. So, if you’re ready, let’s get started.

What is Respiratory Failure?

Respiratory failure is a term characterized by the inability of normal oxygenation or removal of carbon dioxide. During a breathing cycle, the body takes in oxygen while removing carbon dioxide.

This process is known as gas exchange.

However, if not enough oxygen taken into the body, or if not enough carbon dioxide is removed, this results in respiratory failure and can lead to serious medical conditions.

We mentioned that respiratory failure is caused by either a lack of oxygen or by too much carbon dioxide. This means that there are two types:

Hypoxemic respiratory failure (type I) describes a lack of oxygenation where there is a PaO2 of less than 60 mmHg in arterial blood.

Hypercapnic respiratory failure (type 2) describes an acidotic state of which there is a PaCO2 greater than 50 mmHg in arterial blood.

The Egan's book — aka the Bible of Respiratory Therapy — is one I recommend for all students.
Buy from Amazon
As an affiliate, we receive compensation if you purchase through this link.

What is Acute Hypoxemic Respiratory Failure?

It’s a state in which there are severely decreased oxygenation levels that occur over a relatively short period of time. It’s one of the most common reasons that patients are admitted to the intensive care unit (ICU).

Keep in mind that there are other causes of Acute Hypoxemic Respiratory Failure, these are just some of the most common examples. 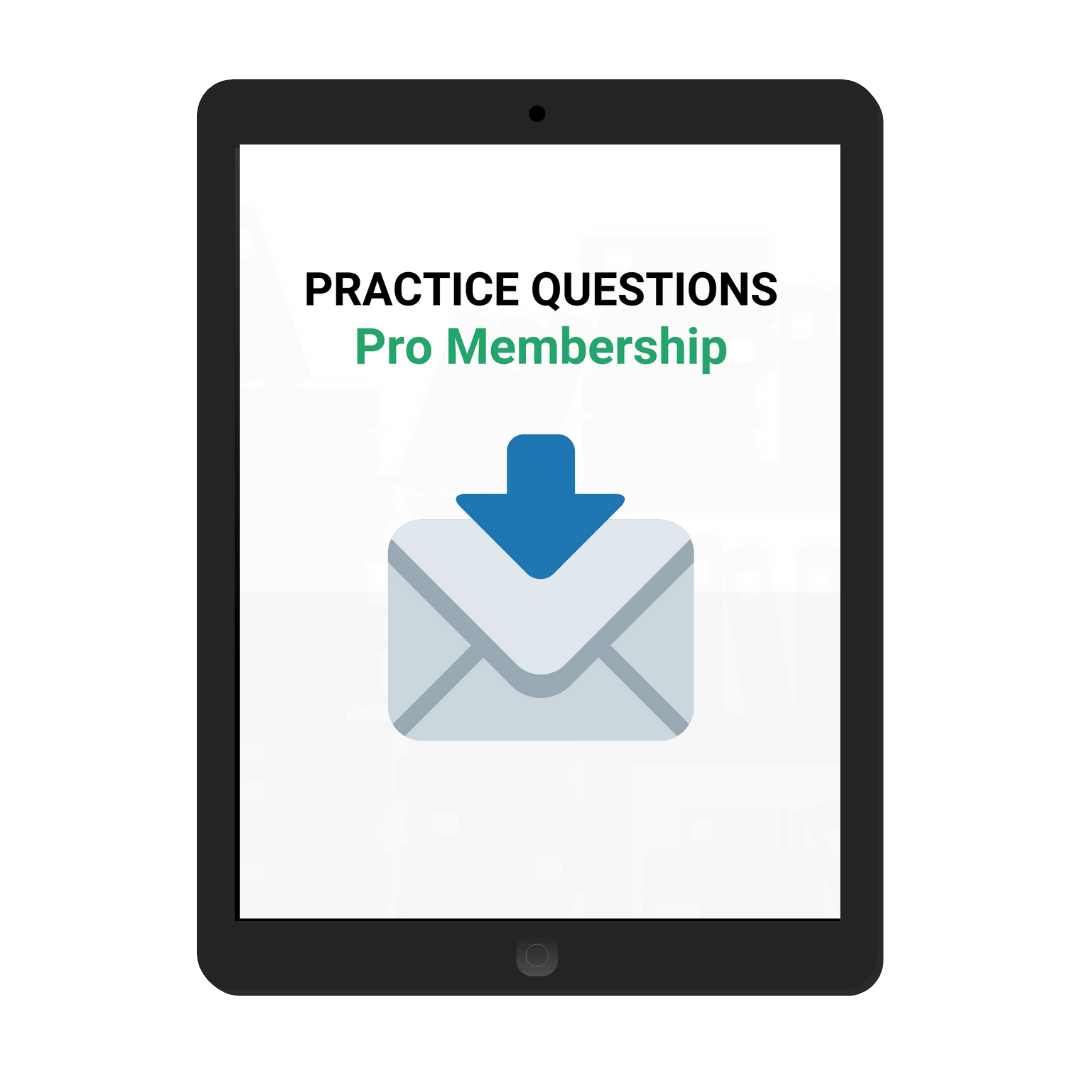 Would you like to get new TMC Practice Questions delivered to your inbox on a daily basis?

1. How is acute respiratory failure identified?
By a PaO2 less than 60 mm Hg or PaCO2 greater than 50 mm Hg, or both, in otherwise healthy individuals at sea level.

2. Hypoxemic respiratory failure is most commonly due to what?
V/Q mismatch, shunt, or hypoventilation.

4. Chronic respiratory failure may manifest with hypercapnia and evidence of what?
A compensatory metabolic alkalosis (chronic ventilatory failure) or with polycythemia reflecting chronic hypoxemia.

5. The clinical status of the patient is the most important factor determining the need for what?
Ventilatory support.

6. Excessive work of breathing is the most common cause of what?
Respiratory muscle fatigue.

7. The beneficial role of NIV in the acute setting has been best established in acute exacerbations of what?
COPD and in cardiogenic pulmonary edema.

8. Increased FiO2 and PEEP are the main therapies for what?
Severe hypoxemia.

9. What is the goal of therapy in hypercapnic respiratory failure?
Normalize the pH.

10. A control variable is the primary variable that the ventilator manipulates to cause inspiration. What are the three variables in the equation of motion that a ventilator can control?
Pressure, Volume, and Flow.

12. What are the main therapies to treat severe hypoxemia?
Increased FIO2 and PEEP.

13. What is the main goal of therapy when treating (acute ventilatory failure) hypercapnic respiratory failure?
To bring the pH values back to normal.

14. What is the most important factor to consider when determining whether or not a patient needs ventilatory support?
The clinical status of the patient.

16. When transporting a mechanically ventilated patient what device must you always bring with you?
You must always have a manually powered bag-valve mask.

17. What are the two different power sources for a ventilator?
Either electrical energy or compressed gas.

19. Most current evidence indicates that NPPV should be the standard of care for managing patients with what respiratory diseases?
Patients with a COPD exacerbation and acute cardiogenic pulmonary edema.

20. What is the selection criteria for NPPV in the care of patients with acute respiratory failure?
Two or more of the following should be present: Use of accessory muscles, Paradoxical breathing, Respiratory rate greater than or equal to 25 breaths/minute, Dyspnea, PaC02 greater than 45 mm Hg with PH less than 7.35, Pa02/FIO2 ratio less than 200.

21. Before NPPV is considered for patients with restrictive thoracic disorders, what symptoms must be present?
Nocturnal hypoventilation.

22. Absence of breath sounds on one side of the chest may reveal what?
Collapse, infection, edema, or effusion as potential causes of the VQ mismatch

23. What is a description of Acute Hypercapnic Failure?
The pH decreases 0.08 for every 10 mm Hg increase in PaCO2.

24. How does hypoventilation differ from other causes of Acute Hypoxemic Respiratory Failure?
Manifesting with a normal alveolar to arterial PO2 difference.

25. Hypercapnic Respiratory Failure is also known as what?
Ventilatory Failure. It is the inability to maintain the normal removal of CO2 from the tissue, and may be indicated by a PaCO2 greater than 50 mm Hg in an otherwise healthy individual.

26. What is Hypercapnic Respiratory Failure?
An elevated PaCO2, creating an uncompensated respiratory acidosis.

27. Hypercapnic Respiratory Failure is also known as what?
Pump failure or ventilatory failure.

28. An MIP of what usually indicates adequate respiratory muscle strength to continue spontaneous breathing?
An MIP of -30 cm H2O.

29. What is Noninvasive Ventilation (NIV)?
Mechanical ventilation without endotracheal intubation of tracheotomy, usually via a form-fitting mask.

30. A physiologic shunt leads to hypoxemia when?
When the alveoli collapse or when they are filled with fluid or exudate.

31. What is Respiratory Failure?
The inability to maintain either the normal delivery of oxygen to the tissues or the normal removal of carbon dioxide from the tissues and often results from an imbalance between respiratory workload and ventilatory strength of endurance.

33. What is respiratory muscle weakness?
The decreased capacity of a rested muscle to generate force and decreased endurance.

37. A shunt is differentiated from a V/Q mismatch by?
The lack of increase in PO2 as FiO2 is increased.

38. What is Venous Admixture?
A decrease in mixed venous oxygen increases the gradient by which oxygen needs to be stepped up as it passes through the lungs.

42. What are the three main causes of Hypoxemic Respiratory Failure?
Hypoventilation, V/Q mismatch, and Shunt.

46. What is a Shunt?
An extreme version of V/Q mismatch in which there is no ventilation to match perfusion.

47. What is the clinical presentation of a patient with a V/Q mismatch?
Hypoxemia commonly manifests with dyspnea, tachycardia, and tachypnea, use of accessory muscles, nasal flaring, lower extremity edema, peripheral or central cyanosis

48. What is the most common cause of hypoxemia?
Ventilation/Perfusion Mismatch.

50. What is the treatment for decreased inspired oxygen?
Supplemental oxygen

52. Hypercapnic respiratory failure is also known as ventilatory failure, and this results from what?
Neurologic disease, decreased ventilatory drive, and increased work of breathing.

53. What is hypoxemic respiratory failure?
The inability to maintain normal oxygenation in the arterial blood (i.e. oxygen is too low).

54. In what disease states have NIV been shown to be beneficial in the acute setting?
Acute exacerbation of COPD, and Carcinogenic edema.

55. What are the main therapies used for severe hypoxemia?
Increased FiO2 and PEEP.

56. What are the most common reasons for Hypoxemic Respiratory Failure?
V/Q mismatch, shunt, and hypoventilation.

58. What is the goal of therapy in hypercapnic respiratory failure?
To normalize the patient’s pH.

59. What is the most common cause of respiratory muscle fatigue?
Excessive work of breathing

60. What is the most important factor determining the need for ventilatory support?
The clinical status of the patient.

62. What is work of breathing?
The amount of force needed to move a given volume into the lung with a relaxed chest wall; mathematically, work is the integral of pressure times volume (the physiologic cost of increased dead space and resistance).

65. What is the goal of treating hypercapnic respiratory failure?
The goal is to normalize the pH.

Respiratory failure is an extremely important topic for medical professionals. This is especially true for Respiratory Therapists.

RT’s must be able to recognize and provide care for patients with hypoxemia and/or ventilatory inadequacies. Hopefully, this study guide can help you learn the basics of this topic.

We have a similar guide on Ventilation vs Oxygenation that I think you would find to be useful. Thank you so much for reading and, as always, breathe easy my friend.