What is a Drug Overdose? (Medical Overview and Definition) 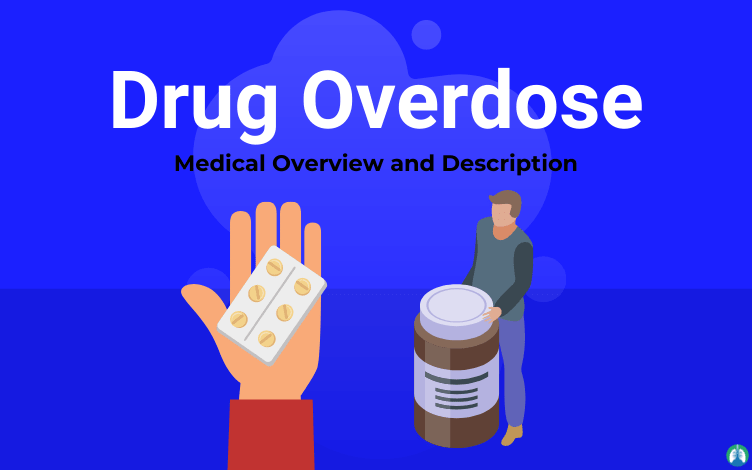 A drug overdose occurs when someone takes in to much of a medication and can be harmful or even life-threatening. As a Respiratory Therapist or medical professional, it’s important to know about this topic in order to best treat patients in this condition.

This study guide provides an overview and covers the medical definition of a drug overdose. It also has helpful practice questions as well. So if you’re ready, let’s get started.

What is a Drug Overdose?

When a person takes too much of a medication that is more than the recommended medical dose, this is considered to be a drug overdose. The medication could be prescription, over-the-counter, or illegal, and it could be intentional or accidental.

The symptoms of a drug overdose depend on the specific substance that is involved, as well as the route by which it enters the body. Because of the variability that may present with a drug overdose, the most important thing to do as a Respiratory Therapist is to stabilize the patient and establish an airway if necessary.

With that said, you may notice that the patient has slow or shallow breathing along with an altered level of consciousness. These are sure signs that a drug overdose may be present.

One of the major pharmaceuticals that cause a majority of drug overdose deaths is narcotic opioids. Some examples include morphine, heroin, and oxycodone.

A narcotic overdose is a very serious situation because it causes apnea and respiratory depression which may result in the need for intubation and mechanical ventilation.

2. What is the major pharmaceutical that causes the most overdose deaths?
Opioids.

3. What drug is given to someone suspected of a drug overdose?
Naloxone (Narcan).

4. When ventilation gets worse on NIV, is it better to wait another 30 mins to see if the patient gets better?
No, proceed with intubation and mechanical ventilation.

5. What will be the interpretation of a drug overdose ABG?
Respiratory acidosis.

6. What is the brand name of Naloxone?
Narcan.

9. Why intubate a patient who may have a drug overdose?
Protect the airway and stop possible aspiration.

10. What breathe sounds that can be heard for a drug overdose?
Diminished.

12. What time of day do overdose patients present to the ER?
Late night.

13. What are the common routes of exposure to a drug?
Inhalation, ingestion, and injection.

14. What is the most common drug people overdose on?
Heroin and OxyContin.

15. Is death from drug overdoses continue to rise?
Yes.

17. What can cause hypoventilation when taken accidentally or intentionally?
A medication or drug overdose.

18. What are the most common and particular drugs that cause respiratory depression, especially when combined with other depressants?
Opioids.

19. What can be a potentially life-threatening side effect in medication and recreational drugs?
Overdose and hypoventilation.

21. What are common examples of opioids?
Oxycodone, fentanyl, heroin, morphine, and codeine.

23. What are the risk factors for drug overdose resulting in respiratory acidosis?
Drug addicts, addiction personality, people with memory loss (mistakenly taking medications 2x or more due to forgetfulness) and elderly due to aging (toxicity- body systems slowing down).

24. What are the common antidotes for a drug overdose?
Naloxone () for opioid overdose, flumazenil () for versed and other, benzodiazepines (valium, Xanax, Ativan, restore, helicon), Vitamin K for warfarin overdose and protamine sulfate for heparin.

25. What are the diagnostics testing for drug overdose patients?
ABG: ph < 7.35, PaCO2 > 45, monitor electrolytes carefully, especially K+, daily weights, I and O; and, EKG possible due to potassium levels.

26. What is the prevalence of a drug overdose?
Drug-induced death now outnumbers suicide, injury by firearms, and homicide. Emergency room visits from prescription drug overdoses doubled from 2004 to 2009. Overdose deaths from painkillers have risen from less than 2,901 in 1999 to 11,499 in 2007. By 2007, more teenagers used opioid analgesics recreationally than used marijuana.

27. What are the adverse reactions of a drug overdose?
Occur when individuals accidentally or intentionally misuse drugs. Misuse means self-administered without medical control for proper or sterile preparation-self prescribed. It may result in compulsive use.

29. How do opiates work in the and spinal cord receptors?
Bind to the site to turn off pain centers in the brain. Commonly causes euphoria. Produce drowsiness. May result in CNS depression (depress respiration) which is the reason why we are called to all OD patient rooms.

30. How do opiates work in GI receptor sites exist as well?
Decreased motility of GI tract results, constipation is common.

31. What are some signs of opiate abuse?
Tolerance to a substance occurs over time. Once addicted, the withdrawal will ensue restlessness, muscle and bone pain, insomnia, diarrhea, vomiting, cold flashes, anger and combative and behavior, and, paranoia.

32. What are the treatments for an opiate overdose?
For recent PO ingestion, activated charcoal, and gastric lavage. Narcan: late stage PO ingestion, indicated for IV injection victims, doses high enough to reverse respiratory depression, available OC, reverse too far and the patient can seize, and O2 when necessary. Prevent detox with low doses.

33. What do stimulants counter?
Suppressants.

34. What are benzodiazepines and what are some examples?
Used as antianxiety medications and hypnotics (sleep meds). Nembutal is one example that is used for anxiety and sleep disorders.

35. What are the effects of benzodiazepines?
Seizures from withdrawal are common, since brain activity is slowed down, stopping the drug will cause the brain to rebound and race out of control leading to seizures. The hypnotic/amnesiac effect which is common in accidental OD. Drug combination creates a high risk for respiratory depression, especially with alcohol, opiates, barbiturates; combining with other drugs such as cold and allergy medications, alcohol, and painkillers enhances the respiratory depression. Give O2 support.

36. What is the treatment for a benzodiazepines overdose?
For recent PO ingestion, emesis when indicated, gastric lavage, activated charcoal (PO / NG /OG). For IV or late phase PO ingestion, (Please note that this is not effective). BVM when indicated.

37. What does alcohol have to do with drug overdoses?
It accounts he largest amount of ED admissions for any drug on record. Greatest complications result from mixing with other drug classes. BAC: 0.05, 0.08, 0.15, and 0.20 extreme.

38. What is the treatment for alcohol abuse?
Volume replacement, electrolyte replacement, prevents self-injury, monitor level of consciousness, monitor for shock, ventilatory support if needed and benzodiazepines to fight DT’s.

39. What are stimulants?
It enhances brain activity that causes an increase in alertness, attention, and energy. Amphetamine, Ritalin, caffeine, and cocaine.

40. What are the effects of stimulants?
Increased BP, increased HR, and increased respiration.

41. Why do we use stimulants?
Narcolepsy, ADD/ADHD, asthma, depression obesity.

42. What are the effects of stimulants in the body?
High energy, increases blood glucose, euphoria, nausea/vomiting, convulsions/seizures, bronchodilation, paranoia, anxiety and leads to fast cardiac deterioration.

43. What are the treatments for stimulant use?
Primary concerns are controlling blood pressure and prevent CVA/stroke, controlling heart rate where you may use beta blockers, loss of consciousness leading to aspiration risk and may need to be intubated, bag-mask ventilate and evaluate neurological status through head CT.

46. What is LSD (lysergic acid diethylamide)?
It is the most known potent mood and perception-altering drug. Dramatic effects on colors, smells, sounds, and other senses intensified. Produces longer term psychosis and flashbacks.
No treatment and may be used as antidepressants and psychotherapy.

47. What is PCP?
It was developed as a surgical anesthetic, low doses result in shallow rapid breathing, high blood pressure, and heart rate. High doses can cause dangerous blood pressure and decreased awareness of pain. Muscle contractions can break .

48. What are the first three steps when a patient presents to ER with a suspected overdose?
Assess airway. Assess breathing. Assess circulation.

49. What is the process for securing the airway?
Assess airway and breathing. Give 02 if necessary. Head-tilt chin-lift, bag valve mask and may require advanced airway support in nasal trumpet and endotracheal tube (intubation).

50. What is the process for checking circulation?
Monitor BP and support if necessary with IV fluids, norepinephrine if not fluid responsive and NTG or nitroprusside.

52. What is screened on toxicology?
Opiates, benzos, salicylates, acetaminophen, and ethanol.

As a medical professional, it’s important to know how to treat a patient with a drug overdose. This is especially true for Respiratory Therapy Students because it’s a topic that will be required on the board exams.

Hopefully this study guide makes the learning process easier for you. Thank you so much for reading and as always, breathe easy my friend.