Spirometry Testing: What is a Spirometer? (2021 Overview) 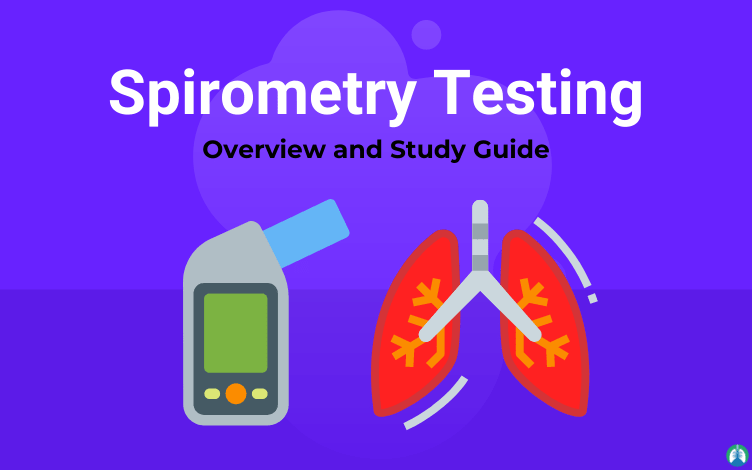 Spirometry is a Pulmonary Function Test (PFT) that measures a patient’s breathing patterns and lung functionality. It’s a topic that all Respiratory Therapists must be familiar with.

This study guide was designed to provide an overview of Spirometry Testing. It contains practice questions on this topic for your benefit as well. So if you’re ready, let’s get started.

What is Spirometry Testing?

Spirometry is a type of Pulmonary Function Testing (PFT) that measures airflow and volume as it moves into and out of the patient’s lungs. This means that spirometry testing occurs during both the inspiratory and expiratory phases of the breathing cycle.

The results of a spirometry test are dependant on patient effort. Therefore, if the patient gives poor effort during the test or does not use the proper technique, the results could be inadequate.

What is a Spirometer?

A spirometer is a common device used in Pulmonary Function Testing (PFT). When a patient breathes into and out of a spirometer, it can measure the volume of air and flow rate during the ventilatory cycle.

Since it measures both volume and flow, this means that it’s useful in identifying both Obstructive and Resistive Respiratory Conditions.

There are different types of spirometers that are indicated at different times during Pulmonary Function Testing. The following are some examples:

To learn more about each different type of spirometer, you can look into Ruppel’s Manual of Pulmonary Function Testing which is a great resource for students.

This textbook can serve as a great resource for learning more about PFT’s.

1. What is Tidal Volume?
The volume of gas breathed with each normal breath (in L or ml).

2. What is Total Lung Capacity (TLC)?
The volume of gas in the lungs at the end of a maximal inspiration (in liters, L).

3. What is Vital Capacity (VC)?
The volume of gas exhaled from maximal inspiration to maximal exhalation, this may be forced (FVC) or relaxed (in liters, L).

4. What is Residual Volume (RV)?
The gas remaining in the lungs after a maximal expiration (in liters, L). This volume of gas cannot be expelled, regardless of the maneuver performed.

5. What is Functional Residual Capacity (FRC)?
The total volume of gas remaining in the lungs at the end of a tidal exhalation, equaling the sum of the RV and ERV (in L).

6. What is Inspiratory Reserve Volume (IRV)?
The volume of gas that must be inhaled at the end of a tidal inspiration to reach total lung capacity (in L).

7. What is Expiratory Reserve Volume (ERV)?
The volume of gas within the lungs that could still be exhaled after the end of a tidal exhalation (in L).

8. What is normally recorded in either liters (L) or milliliters (ml), and reported at body temperature, pressure, and saturation (BTPS)?
Vital Capacity (VC).

9. When does the spirometer not need to produce a graphic display?
If only the vital capacity is to be measured.

10. Two acceptable vital capacity maneuvers should be obtained within what parameters?
The volumes should be within 150 ml.

11. What is the maximum volume of gas that can be expired when the patient exhales as forcefully and rapidly as possible after a maximal inspiration?
FVC.

12. What are the three distinct phases to the FVC maneuver?
Maximal inspiration, a ”blast” of exhalation, and continued complete exhalation to the end of the test.

13. What two ways can the FVC be displayed?
Volume-time recording and flow-volume recording.

14. Can spirometry measure gas exchange?
No, we can infer gas exchange from spirometry but not directly measure it. Spirometry only measures gas volumes and time (flow = volume/time) – no direct assessment of gas exchange (as does a diffusion capacity measurement).

18. Is the spirometry test more focused on inspiration or expiration?
Expiration, because of airflow diseases. Especially ones that cause obstruction, somewhat disproportionately affect expiration.

19. What values cannot be measured from a spirogram?
Residual Volume and Total Lung Capacity.

20. What is the difference between TLC and RV?
Vital Capacity.

21. What is FEV1?
Forced expiratory volume in 1 second.

23. What is the effort dependent portion of the curve?
If the patient doesn’t make a good effort and breathe out as hard as he can, it will not look normal.

24. What is the effort-independent portion?
On the lower end of the expiratory curve, it won’t matter the type of effort that you make- your curve will look the same.

25. What constitutes as normal results from a spirogram?
If FEV1 and FVC are greater than or equal to 100% predicted even if the FEV1/FVC ratio <0.75 — it is still considered normal. Remember that diseased patients can still have normal tests and it is up to you as a clinician to decide.

27. Premature termination of a spirogram leads to what?
FVC is falsely low.

29. What is the FVC going to be in an obstructive disease?
FVC may be low or normal.

31. What are some clinical examples of obstructive lung diseases?
Asthma, emphysema, and bronchiectasis.

32. What will the expiratory curve look like in obstructive lung diseases?
There will be a rapid rise to a peak but usually, there will be a ‘scooped-out’ appearance/concavity. This is indicative of expiratory airflow obstruction and usually of the small airways.

35. What is the FEV1 going to be in restrictive disease?
FEV1 may be low or normal (if normal, then low-normal).

36. What is the FVC going to be in Restrictive disease?
FVC is going to be low (<80%). This is the key point wherein VC has to be low if you are going to call it a true restrictive pattern.

38. What are some examples of restrictive lung diseases?
Pulmonary fibrosis, and pleural effusion.

39. What is the problem in tracheal obstruction?
Peak flow occurs in the trachea because it is the narrowest point in the tracheobronchial tree (by aggregate cross-sectional area). With tracheal obstruction the “peak” is removed from both expiratory and inspiratory limbs of the flow-volume loop – the curve should otherwise conform to the normal appearance. There are several variants, depending on whether the stenosis is variable (floppy) or fixed – the example above shows fixed obstruction, as might occur from a tracheal stenosis.

40. What happens in quiet breathing?
Inspiration involves muscular contractions and expiration is passive.

41. What do you call the breathing that involves active inspiratory and expiratory movements?
Hyperpnea.

42. What is the amount of air that the patient expelled if she/he inhales as deeply as possible and then blows the air out until he/she cannot exhale anymore?
Vital capacity.

43. What is the resting tidal volume?
It is the amount of air inhaled or exhaled with each breath under resting conditions. The normal value is 500 mL in both males and females.

44. What is the Expiratory reserve volume (ERV)?
The amount of air that you can voluntarily expel AFTER you have completed a normal, quiet respiratory cycle. The normal value is 1000-1200 ml. You use your accessory expiratory muscles.

45. What is the Residual Volume?
It is the amount of air remaining in the lungs even after a maximal exhalation. The normal value for males is 1200 ml while 1100 ml in females.

46. What is the inspiratory reserve volume (IRV)?
It is the amount of air that can be taken in over and above the tidal volume. IRV in males is about 3300 ml and for females is about 1900 ml.

47. What is the Inspiratory capacity?
The amount of air that can be drawn into the lungs after a quiet respiratory cycle has been completed. IC = TV + IRV.

48. What is the Functional Residual Capacity (FRC)?
The amount of air remaining in the lungs after a quiet respiratory cycle has been completed. FRC = ERV + RV.

49. What is the Vital capacity?
It is the maximum amount of air that can move into or out of the lungs in a single respiratory cycle. VC = ERV + TV + IRV. Normal VC for males is 4800 ml while 3400 ml in females.

51. How many breaths can you take each minute?
Resting adult rate ranges from 12 to 18 breaths each minute. Approximately one breath for every four heartbeats. Children take 18-20 breaths/minute.

52. What is Hyperpnea?
It is the forced breathing. It involves active inspiratory and expiratory movements. It also requires the use of accessory muscles of respiration.

53. What is Spirometry?
Used to differentiate between obstructive and restrictive lung diseases. It determines the extent or progress of the disease.

55. When does a decreased or normal FRC occur?
Restrictive diseases and pulmonary fibrosis.

56. What is a Forced vital capacity?
Measures the amount of gas expelled when the subject takes the deepest possible breath and then exhales forcefully and rapidly. The FVC is reduced in patients with a restrictive pulmonary disease.

58. What does a lower pH change?
It changes the shape of the Hb molecules and they release their oxygen more readily.

59. What does the Carbonic Acid-Bicarbonate buffer system do?
It stabilizes arterial blood pH at 7.4 +-0.02.

60. What happens when PCO2 rises?
The rate of carbonic acid formation increases. H+ diffuses out of the RBCs, and plasma pH drops.

61. What happens when PCO2 decreases?
H+ diffuses into the RBCs, and plasma pH rises.

62. What are the indications for using spirometry?
Diagnosis, monitor, public health, and disability/impairment evaluations.

63. What is the role of spirometry in primary care?
It provides an objective measure of airflow restriction or obstruction. Assists with both initial diagnosis of asthma and assessment of asthma control.

64. How do you establish an asthma diagnosis with spirometry?
Detailed medical history to determine episodic symptoms of airflow obstruction or hyper-responsiveness like a cough, wheezing, shortness of breath with exercise. Next is the physical exam to assess the respiratory tract, chest, skin. Lastly, reversibility is determined either by an increase in FEV1 of > 12 % from baseline age for spirometry.

65. What does the reliability of spirometry depend on?
Reproducible efforts and technique; 3 consistent, efforts. FVC of 200mL.

66. What do predicted values in spirometry depend on?
The individual’s age, gender, height, and race.

67. What is the percent predicted?
The numbers are presented as percentages of the average expected in someone of the same age, height, sex, and race.

69. In a restrictive disease, what happens to the FEV1/FVC?
It is decreased proportionately, hence the ratio is in the normal range.

70. What are the characteristics of flow loops?
A classic flow volume loop has a rapid peak and expiratory flow rate with a gradual decline in the flow back to zero. An obstructive pattern loop also has a rapid peak, but the curve descends more quickly than normal taking on a concave shape. A restrictive pattern retains the shape of a normal curve, but the size of the curve appears smaller.

So there you have it. That wraps up our study guide on spirometry testing. As mentioned earlier, a spirometer is a very important device when it comes to Pulmonary Function Testing. Hopefully, this guide has helped you boost your knowledge of this topic.

We have also have a full guide on PFT Equipment that I think you will enjoy. Thanks for reading and as always, breathe easy my friend.