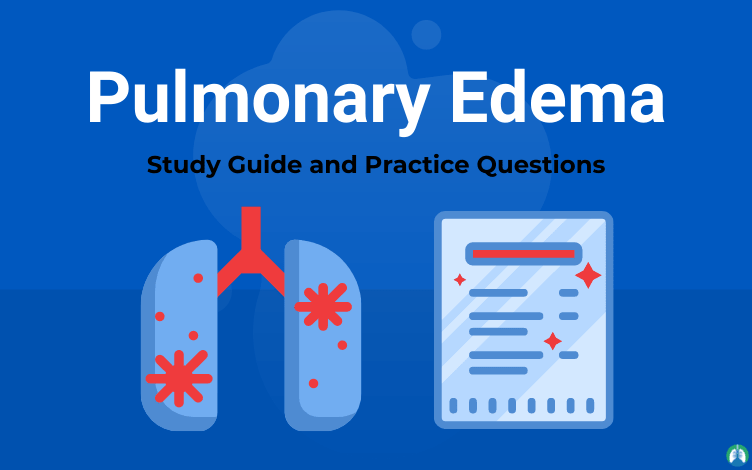 Pulmonary Edema is a condition in which excessive amounts of fluid collects in the alveoli of the lungs that results in dyspnea and impaired gas exchange.

We created this guide to provide a quick overview of this topic in order to make the learning process easier for you. We included practice questions for your benefit as well. So, if you’re ready, let’s get started.

What is Pulmonary Edema?

Pulmonary Edema is a condition in which fluid builds up in the lungs and results in shortness of breath. That is because it prevents the body from being able to get adequate amounts of oxygen.

The most common cause of pulmonary edema is Congestive Heart Failure (CHF).

With this condition, the left ventricle of the heart struggles to pump blood as it should which causes fluid to leak from the vessels. Then, it ultimately begins to accumulate in the lungs.

Signs and Symptoms of Pulmonary Edema:

As a Respiratory Therapist, it’s important to be able to recognize the signs and symptoms when pulmonary edema is suspected. Here are some examples:

Keep in mind that the signs and symptoms can vary from patient to patient.

Each of the signs and symptoms that were mentioned factor into the diagnosis of pulmonary edema. With that said, the following diagnostic tests are also helpful when it comes to confirming the diagnosis:

Keep in mind that other diagnostic testing may be needed. These are just a few of the most common examples.

The treatment methods for pulmonary edema will vary from patient to patient depending on the severity of their signs and symptoms.

As a Respiratory Therapist, the first thing that you will probably notice is severe hypoxemia which can be treated with oxygen therapy. For example, the patient may require 100% oxygen immediately which can be delivered via a nonrebreathing mask.

Diuretic agents would be recommended to treat fluid overload.

4. What is the diastolic dysfunction with pulmonary edema?
Poor ventricular function caused by increased stiffness or impaired myocardial relaxation.

5. How does pulmonary edema happen?
Hydrostatic pressure rises to more than 25-30 mmHg oncotic pressure loses its hold and fluid leaks into the interstitial and airspace of the lungs.

7. What are the signs and symptoms of pulmonary edema?
Shortness of breath, Cheyne-Stokes respiration, paroxysmal nocturnal dyspnea and orthopnea, pink frothy sputum, increased CVP and PCWP, bilateral fluffy opacities, Kerley A (-) Kerley B (/) lines–cardiogenic (congestive heart failure) and pleural effusion (cardiogenic). In acute cases, extreme shortness of breath and difficulty breathing with profuse sweating; a feeling of suffocation or drowning; a bubbly, wheezing or gasping during breathing; anxiety; restlessness; a sense of apprehension; coughing that produces frothy sputum that may be tinged with blood; chest pain (if cardiac); rapid and irregular pulse; cyanotic skin color, and a severe drop in blood pressure.

8. What are the treatments for pulmonary edema?
Inotropic agents (Dobutamine, Dopamine, Norepinephrine), Diuretics, CPAP, and BiPAP.

9. In respiratory therapy, the presence of frothy pink secretions always indicates what?
Pulmonary edema (Definitely remember this for the TMC Exam :)).

10. What are the Anatomic Alterations of the Lungs for edema?
Interstitial edema, alveolar flooding, increased surface tension of pulmonary surfactant, alveolar shrinkage and atelectasis, and frothy white (or pink) secretions throughout the tracheobronchial tree.

This book (in paperback format) has sample TMC Practice Questions on pathology and diseases.
Buy from Amazon
As an affiliate, we receive compensation if you purchase through this link.

12. What happens in cardiogenic pulmonary edema?
Left ventricle unable to pump out all of the blood received from lungs. Pulmonary vein/capillary blood pressure increases. Fluid pushed through capillary walls into alveoli.

13. What is hydrostatic pressure?
Moves fluid out of pulmonary capillaries into interstitial space.

14. What is oncotic pressure?
Draws fluid back in from the interstitial space.

15. What determines the balance pulmonary fluids?
Hydrostatic and oncotic pressures.

16. When will fluid spill in the interstitial space?
When hydrostatic pressure rises above 25-30 mmHg, oncotic pressure loses.

20. When do fluids flow from pulmonary capillaries into the alveoli?
In absence of back pressure.

21. When do decrease intrapleural pressures occur?
During severe airway obstruction.

22. What may create a suction effect on pulmonary capillaries causing fluids to move into the alveoli?
The negative pressure exerted during inspiration.

23. What promotes filling of the right side of the heart hinders flow to the left side and may cause blood pooling in lungs, elevated hydrostatic pressure and pulmonary edema, and sudden removal of pleural effusion (decompression of pulmonary edema)?
Decreased oncotic pressure.

24. When may fluid possibly seep into the interstitial and air spaces of the lung?
If the oncotic pressure drops below 10-15 mmHg (Normal Hydrostatic Pressure).

26. What is orthopnea?
It is shortness of breath while lying flat. It is prevalent in patients with cardiogenic pulmonary edema.

27. What position should patients with pulmonary edema be in and why?
Sitting up due to fluid flooding.

29. What chest assessment findings would you expect with pulmonary edema?
Increased tactile and vocal fremitus, crackles, rhonchi, and wheezing.

30. Which serum levels will be low in pulmonary edema?
Potassium and sodium.

31. What is often seen in patients with left-sided heart failure and may result from diuretic therapy or excessive fluid retention?
Hypokalemia and hyponatremia.

32. What can be observed on the chest x-ray in pulmonary edema patients?
Bilateral fluffy opacities left ventricular hypertrophy (cardiomegaly), Kerley A and B Lines, pleural effusion, and batwing or butterfly pattern.

33. What is the general treatment of pulmonary edema based on?
The underlying etiology.

35. What is used to reduce afterload by introducing venodilation and venous pooling that is also used for sedation and relief of anxiety?
Morphine sulfate.

37. What is used on an increased oncotic pressure in an effort to offset the increase hydrostatic forces of cardiac pulmonary edema?
Albumin and mannitol.

38. What techniques are used when there is a decreased oncotic pressure?
Positioning the patient in Fowler’s position, rotating tourniquets (rarely used), and phlebotomy (rarely used).

39. How do fluids in pulmonary edema move?
Progressively from the pulmonary vascular system (pulmonary capillaries), perivascular and peribronchial interstitial spaces, alveoli, bronchi, and trachea, where the patient may cough it out.

40. What are the major pathologic or structural changes seen in the lungs with pulmonary edema?
Atelectasis, surface tension of alveolar fluids, and alveolar flooding.

41. What are some available of cardiogenic pulmonary edema?
A low salt diet, lowering blood pressure, and increasing urine output with a diuretic medication.

42. What treatment should be given for cyanosis and shortness of breath for patients who have pulmonary edema?
Oxygen therapy.

43. Why is a CPAP used in pulmonary edema?
Because it decreases vascular congestion, reduces work of breathing, and improves lung compliance.

44. What will often show on the chest radiograph in cardiogenic pulmonary edema?
Pleural effusion, cardiomegaly, and bilateral “butterfly” pattern fluffy , among other findings.

45. What will often show on the chest radiograph in non-cardiogenic pulmonary edema?
Normal cardiac silhouette and fluffy densities near the hilum.

46. What is acute pulmonary edema considered?
A medical emergency.

47. What causes non-cardiac pulmonary edema?
Fluid leaks from the capillaries within the alveoli since the capillaries themselves become more permeable. May result from pneumonia, exposure to certain toxins and medications, smoke inhalation, respiratory distress syndrome, and living at high elevations.

48. What type of disease is pulmonary edema?
Restrictive disease.

49. What two spaces in pulmonary edema where fluid first seeps into?
Perivascular and peribronchial interstitial spaces.

50. What are the anatomic alterations of pulmonary edema?
Fluids may progressively move into the alveoli, bronchioles, and bronchi; may seep into the alveolar walls and interstitial spaces as well; surface tension that leads to alveolar shrinkage and atelectasis; and, fluid accumulates into the tracheobronchial tree which leads to coughing up (pink) frothy secretions.

53. What is the most common cause of pulmonary edema?
Increased pulmonary capillary hydrostatic pressure.

55. What is non-cardiogenic pulmonary edema?
Increased capillary permeability stemming from infection, inflammatory and other processes.

57. What is the GOLD standard finding in pulmonary edema?
Greatly decreased residual volume.

58. Why do we use albumin to treat pulmonary edema?
It will not cross the capillary membrane and will stay in the vascular system.

59. What are the anatomical alterations of the lungs associated with pulmonary edema?
Interstitial edema, alveolar flooding, increased surface tension of alveolar fluids, alveolar shrinkage and atelectasis, and frothy, white (or pink) secretions through the tracheobronchial tree.

64. What are the PFT findings associated with pulmonary edema?
Restrictive with decreased volume and capacities.

66. What is the heart size with cardiogenic pulmonary edema?
Cardiomegaly.

67. What is the heart size with non-cardiogenic pulmonary edema?
Normal.

68. What are the radiologic findings associated with non-cardiogenic pulmonary edema?
Chest radiograph commonly shows areas of fluffy densities that are usually denser near the hilum. The infiltrates may be unilateral or bilateral. Pleural effusion is usually not present. The cardiac silhouette is not enlarged.

69. What is the general treatment for cardiogenic and non-cardiogenic pulmonary edema?
Treatment is based on the severity.

70. What is the general treatment for non-cardiogenic pulmonary edema?
Largely supportive and aimed at ensuring adequate ventilation and oxygenation.

71. What is the general treatment for cardiogenic pulmonary edema?
Maintaining the patient’s airway, oxygenation, and ventilation.

73. What are the inotropic agents for cardiogenic pulmonary edema?
Dobutamine, dopamine, norepinephrine, and milrinone.

74. What are the other agents used in the general management of cardiogenic pulmonary edema?
Antidysrhythmic agents, bradycardia (atropine), tachycardia (procainamide, , bretylium), and albumin or mannitols are used to increase the patient’s oncotic pressure.

75. What are the respiratory care treatment protocols for pulmonary edema that typically do not help?
Alcohol (ethanol, ethyl Alcohol) – antifoaming agent, decreasing hydrostatic pressure as it keeps fluid in pulmonary circulation, positioning the patient in position (sitting up), rotating tourniquets (rarely used) and phlebotomy (rarely used).

So there you have it. Pulmonary Edema is a condition that you absolutely must understand and know well as a Respiratory Therapist.

Hopefully, this study guide can help you along the way. We have a similar guide on the topic of Congestive Heart Failure that I think you will find useful.